How's everything going, my fellow Mets fans?  This is your favorite Studious Metsimus roving reporter/culinary expert, Joey Beartran, and I just returned from a trip to the land of Juicy Lucys and Mary Tyler Moore.  Ya, for sure.  You betcha I'm talking about Minnesota.

Target Field is home to the Minnesota Twins, but you wouldn't think that after the Mets made themselves at home there for a couple of days.  I only made it to the series opener, but unlike my trip to San Diego a few months ago, my colleague didn't get tickets to the wrong game, mainly because the Mets swept the two-game set.

In addition to attending an actual Mets road victory for a change, I also toured the ballpark and sampled some local eats.  Along the way, I found out that Prince is still really huge in the Gopher State, the Mets have employed a whole bunch of Twins Hall of Famers and tour guides are very friendly with their guests.  Almost a little too friendly.

Are you ready to be taken for a ride?  Then fasten your seat belts, 'cause we're about to blast off like a Pete Alonso home run.


Since our stay was going to be brief in Minneapolis, we decided to take the Target Field tour on the morning of the Mets' first game against the Twins.  There were several tour guides there to accommodate the dozens of mostly Mets fans who showed up expecting the usual "here are our expensive suites and here is the one tiny place in the ballpark where we acknowledge that the team has some history" spiel.  Oh wait, that's what they do at Citi Field tours.  My bad.

At Target Field, they actually appreciate and celebrate their history.  And it's not just Minnesota Twins history.  Prior to 1961, the Twins played in our nation's capital as the original Washington Senators.  Just because the Senators don't exist anymore doesn't mean they've been forgotten.  Within the ballpark are homages to the three pennant-winning Senators teams.  (Washington played in the World Series in 1924, 1925 and 1933.)  In addition to these tributes, our octogenarian tour guide, Bob - who looked like he could have been an usher for the Senators at old Griffith Park in D.C. - showed us a wing dedicated to the franchise's super slugger and gentle giant, Harmon Killebrew.  And since the first seven seasons of Killebrew's career were spent in Washington, it was pleasing to see that he was equally depicted wearing Senators and Twins jerseys. 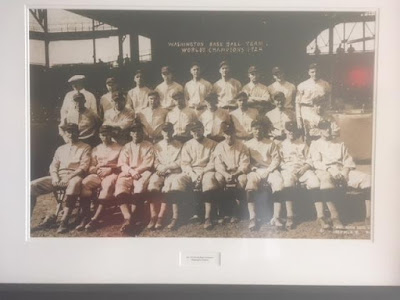 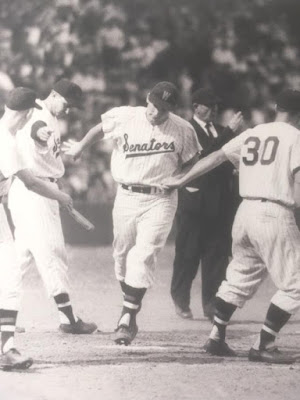 The Twins have had many great players in their fifty-plus seasons in Minnesota.  And it seems like all of them have sections devoted to them in the ballpark.  Hall of Famers such as Killebrew, Rod Carew and Kirby Puckett all have statues and gates named after their uniform numbers (Gates 3, 29 and 34, respectively.)  But native Minnesotan Kent Hrbek also has a statue and gate, as well as three-time batting champion and 15-year member of the Twins, Tony Oliva.  (Their statues are near Gates 14 and 6, naturally.)  And if that's not enough in the statue department, they even have full-size bronze effigies of two-time World Series-winning manager Tom Kelly and mascot TC Bear.

Within the park are also display cases and walls dedicated to Paul Molitor, another Minnesota-born Hall of Famer, as well as fan of flatulence Bert Blyleven and 21st century Twins legend Joe Mauer, whose number was retired by Minnesota just nine months after he played his final game for the team.  (Let's see how long the Mets wait to retire David Wright's number.  Hopefully before the team "accidentally" gives it to Kelvin Torve's son or some other no-name Met.)

There's basically no part of the park in which you can't find a tribute to a great Twins player, as illustrated by the photos below.  Even former Met Jerry Koosman got a mention because he was born in Minnesota and was a 20-game winner for the Twins in 1979. 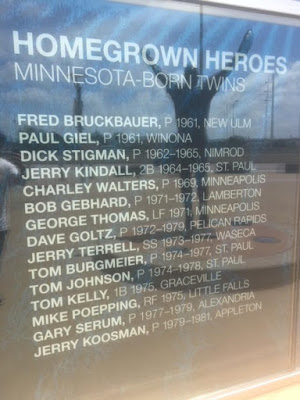 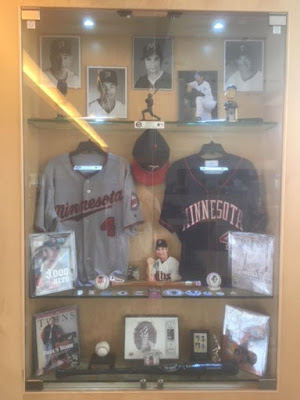 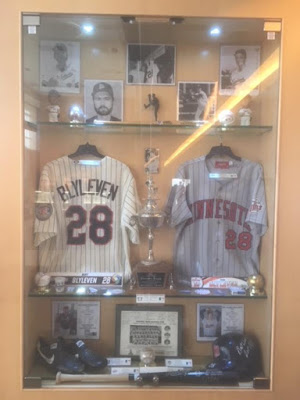 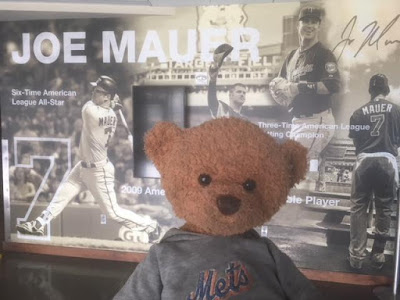 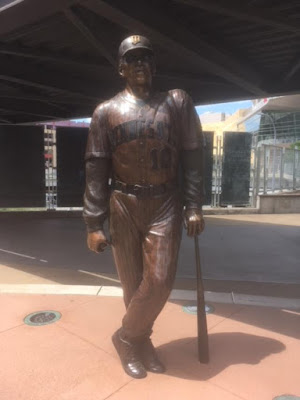 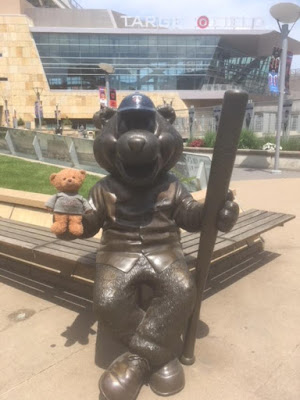 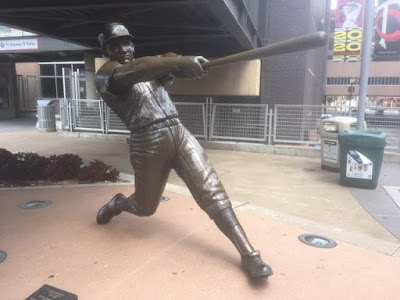 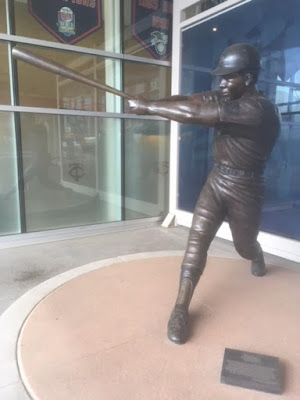 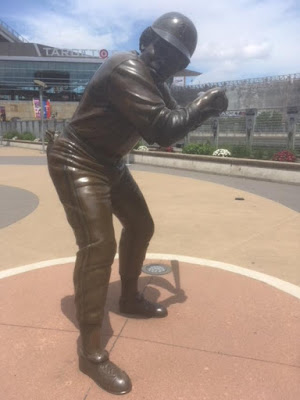 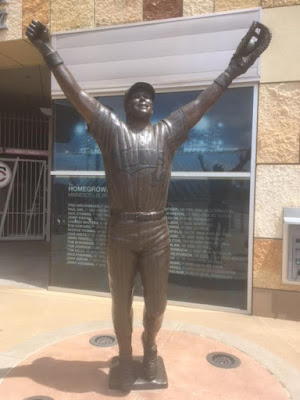 Just look at all those beautiful statues.  Meanwhile, all the Mets have is a Casey Stengel gnome tucked away near a window in the team's Hall of Fame and Museum and a not-yet-completed Tom Seaver statue that'll probably be put in the same area where the Home Run Apple was relegated to in 2009.  Because Mets.

Speaking of the Hall of Fame and Museum, the Twins even display their history outside the ballpark, with pennants depicting all of the members of their own Hall of Fame.  And of course, all of them fared far better for the Twins than they did for the Mets.


Seeing how the Twins honor their former greats made me want to take off my roving reporter hat and put on my culinary expert cap.  So before heading out for some poutine (I was in a state that borders Canada, you know), I decided to check out what Target Field had to offer in the food department.  And I'm happy to report that I wasn't let down.

In the Champions Club, you can get everything from street corn dogs to a steak mushroom Alfredo pizza.  Had my colleague remembered to bring extra meal money, perhaps I could have sampled some of these delicacies.  Instead, I had to eat food from the concourses.  Fortunately, I did not consider this a downgrade, especially after I saw all the choices.

You can have Cuban sandwiches at Tony O's or the Italian fare at Frankie V's (named after Frank Viola, of course).  Want a 24-inch long Boomstick frankfurter or some tasty bratwurst?  They've got that.  There's even soul food at Soul Bowl and Mexican delicacies at Señor Smoke's.  (I had the last two for quality assurance purposes.)

Target Field has no shortage of food selections for hungry fans.  In addition to these stands, Target Field has an area of rotating vendors near the Kirby Puckett gate.  Clearly, they were speaking my language when they built the food stands at this ballpark. 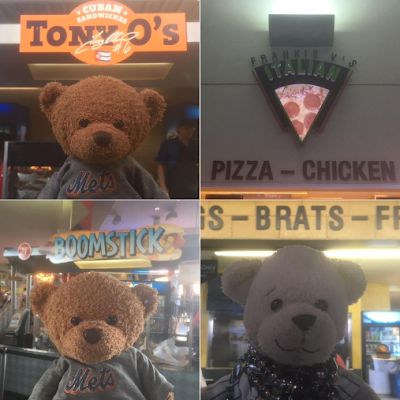 So far I've discussed Target Field's tour and food.  Now it's time to talk about the ballpark and some interesting features that you won't see in many other stadiums.

Located in the Terrace Level behind home plate is 2 Gingers Pub.  Sure, you can get an adult beverage there.  But the main reason people go there is to chat with Twins organist Sue Nelson.  Throughout the game, Ms. Nelson plays her favorite instrument, which sounds so much better than the ear-shattering recorded music that we're normally subjected to at baseball games.

When Ms. Nelson is not playing, she's shmoozing with fans, who are allowed to go up to her throughout the game.  And who wouldn't want to say hello to her, especially with that radiant smile greeting you when you enter the pub?


In addition to Ms. Nelson's organ playing, other features that make Target Field a little different than most other ballparks include exit velocity and launch angle on the scoreboard (for all you nerdy kids out there), the classic logo of Minnie and Paul shaking hands over the Mississippi River, the flagpole from old Metropolitan Stadium (which was the Twins' original home when they moved to Minnesota in 1961), the MLB and Twins logo made entirely of wooden bats, a plethora of purple Prince products in the Twins clubhouse shop and the only mascot in the American League that's also a bear.

As you can imagine, my colleagues had to stand in line to meet TC Bear, even if it meant missing an inning or two of the Mets game. 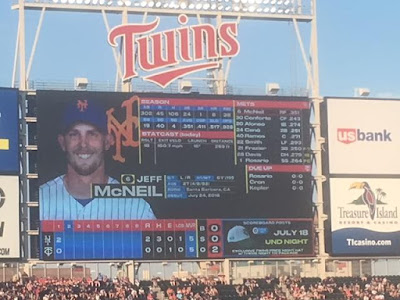 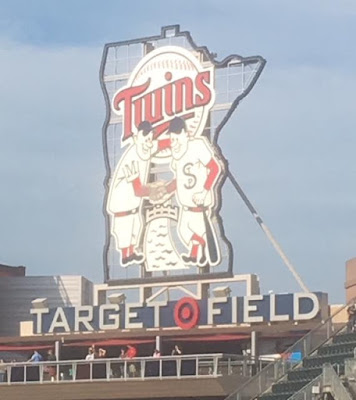 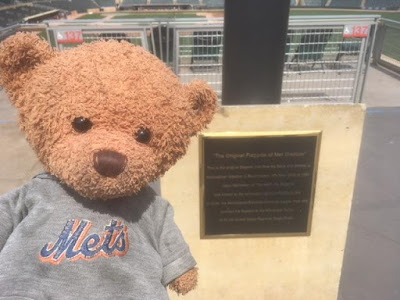 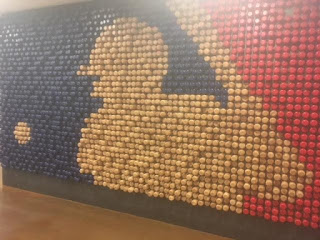 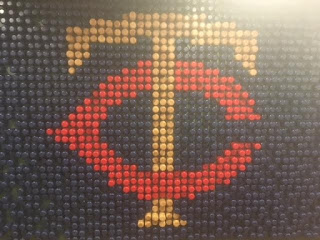 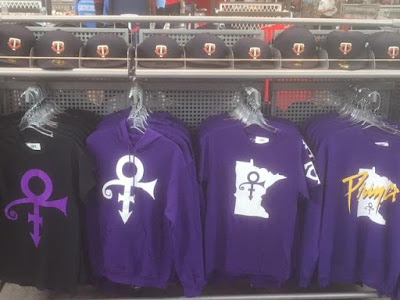 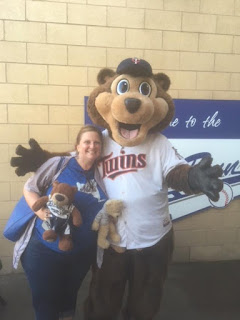 So that's all for my trip to the North Star state, a trip that featured two Mets victories against the Minnesota Twins.  On this journey, I learned that the Washington Senators are gone, but not forgotten.  I also learned that the Twins are proud of their homegrown players and anyone who has ever contributed positively to the franchise.  They also specialize in a diverse assortment of ballpark cuisine and Irish pubs that are actually secret hiding places for smiling organists.

Oh, and remember when I mentioned Target Field's very friendly tour guides twenty paragraphs ago?  (You can scroll up; I'll wait.)  Yeah, they get very attached to their guests, especially when they consist of famous roving reporters and culinary experts.

Love you, Bob the Tour Guide.  Thanks to you and the Mets' performance in Minneapolis, my stay in your state was one I'll remember for quite some time.


For previous installments of Joey's World Tour, please click on the links below, where you will be entertained by Joey's wit, photos and love of ballpark cuisine:

Scribbled by Ed Leyro (and Joey Beartran) at 6:56 PM No comments: