Before the band asked Kenneth for the frequency and after they lost their religion, R.E.M. released a single called "Everybody Hurts".  The accompanying music video depicted motorists in a traffic jam, alone with their thoughts until they decided to walk away from a situation that wasn't going anywhere.

The 2017 Mets have started slowly.  Unlike the last two seasons, when the Mets rolled off long winning streaks in April, this year's model is already 4½ games behind the first-place Nationals and struggling just to make it back to .500,  That's not the team's only struggle, as the team is being forced to deal with every injury known to mankind.

A quarter century ago, people walked away from a traffic jam as a popular R.E.M. song was playing in the background.  Today, no one's walking away without a walking boot attached to whichever body part is ailing them.  That's because on the 2017 Mets, everybody's hurt.  And not even a song parody is going to get them back on the field.  If only it could, though.  If only it could...

When your season's long
And the Nats, the Nats are in first alone
When injuries just pile up
And the limbs won't hang on

Don't let yourself go
Or your career will die
Everybody's hurt ... all the time

If you ache and moan, here's advice
The trainer's got to go
When you've torn your rotator cuff, and he tries
To splint your toe

Scribbled by Ed Leyro (and Joey Beartran) at 4:06 PM No comments:

The Mets are coming off back-to-back postseason appearances for only the second time in team history.  After their first set of consecutive playoff berths in 1999 and 2000, New York barely finished above .500 in 2001.  After that, the Mets ran Bobby Valentine out of town in 2002 and then Art Howe battled his way through two lousy seasons.

Will the 2017 Mets follow the breadcrumbs left behind by their underachieving early-aughts predecessors?  Or will they actually go where no Mets team has gone before; the playoffs for a third straight season?

Only time and a 162-game campaign will tell.  But in our case, we don't have to wait for the end of a six-month season to discover the Mets' fate.  We have a Magic 8-Ball for that.  And since it usually doesn't want to be bothered, let's ask it our annual questions before it starts acting like a douche.  (Although I think the Magic 8-Ball can be quite amusing when it acts like Bryce Harper.)

So without further ado, here's your buddy and mine, the Magic 8-Ball!  It's wonderful to have you back, M8B! 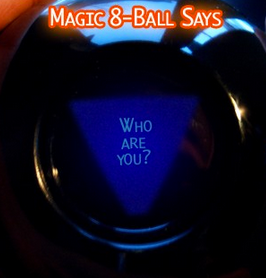 Um, I'm the guy who asks you questions every year about the state of the Mets.  In fact, this is the eighth year we've done this.  Clearly, you must remember our interviews. 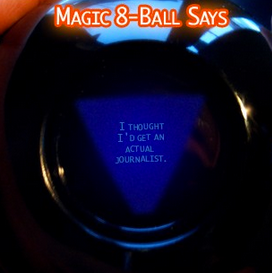 Sorry I don't meet your expectations.  Who did you want to interview you?  Mike Lupica?  Jared Diamond?  The late Jimmy Breslin? 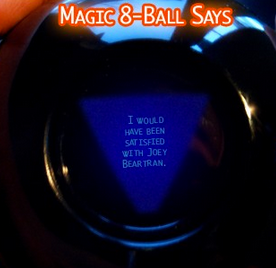 Well, he's hibernating right now so you've got me!  Anyway, let's just get on to the questions.  What's your outlook on the Mets' pitching staff?  Will they carry the team to the promised land? 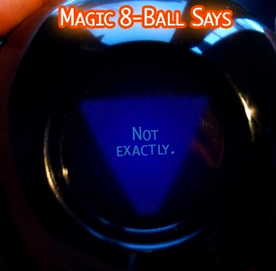 Not exactly?  Do you not think Noah Syndergaard is a legitimate Cy Young Award candidate?  You can't think Jacob deGrom will be inconsistent like he was last year now that he found his velocity again.  And Robert Gsellman and Seth Lugo looked pretty solid at the end of the 2016 season as well.  What's missing from the staff that will prevent them from attaining late October glory? 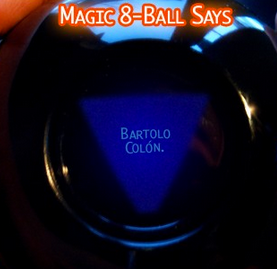 Do you honestly think Colón is the missing link who could carry the team to a World Series title? 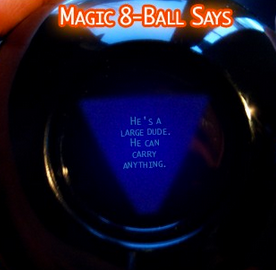 Ha ha.  Very funny.  Let's shift to the offense.  Will Jay Bruce ever be able to match the numbers he put up in Cincinnati? 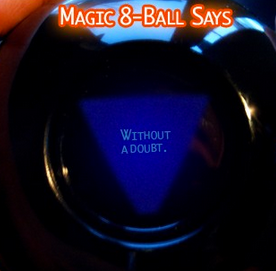 That's good to hear.  So does that mean we should expect 30+ homers and close to 100 RBI from the Mets' right fielder? 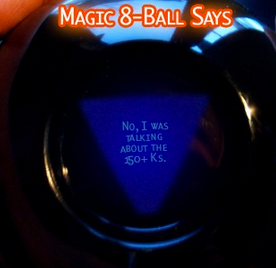 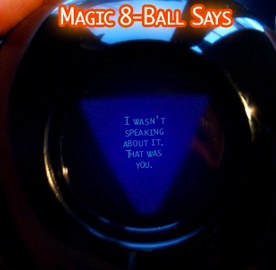 Fine!  While I was on the subject of 30 HR and 100 RBI, what do you think are the chances of Lucas Duda recovering from the injury that caused him to miss most of last season?  Will he ever become a feared hitter who can protect Yoenis Céspedes in the lineup? 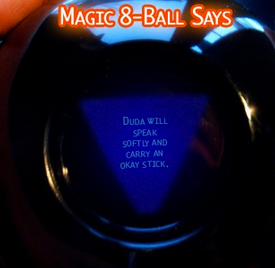 I guess carrying an okay stick is better than carrying James Loney on the 25-man roster.  Now let's talk about Asdrubal Cabrera.  Will he have another solid season like the one he had in 2016? 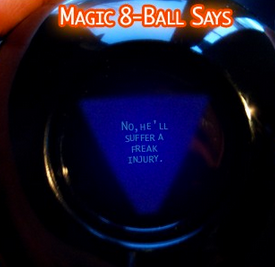 What's going to happen?  Is Cabrera going to get his finger stuck in a teammate's batting helmet when he takes it off his head?  Will one of his game-ending bat flips end up whacking him on the head when the bat returns to terra firma?  I need to know! 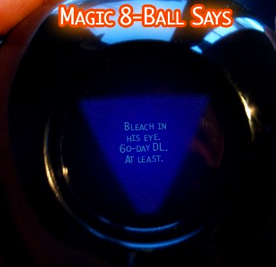 At least?  For getting bleach in his eye just from dyeing his hair?  What could possibly be the reason for his disabled list stint being longer than 60 days? 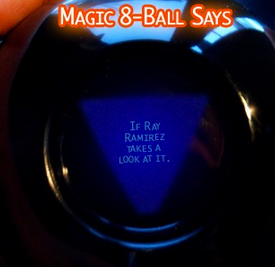 That's a valid point.  It's probably the first one you've made all day. 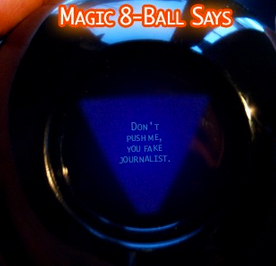 Whatever.  So let's talk about something that can't possibly lead to an argument.  I'm talking about Yoenis Céspedes.  He just signed a four-year, $110 million contract to stay in New York when most people thought he would sign for more years and/or more dollars elsewhere.  What are your thoughts on the man who's turned Citi Field into his own personal playground? 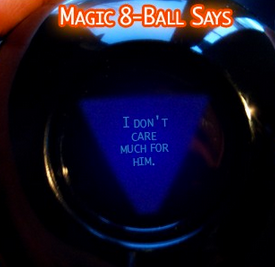 How can you possibly say that?  He's become an icon in just a year and a half.  His face adorns one of the greatest Free Shirt Friday giveaways from last season.  His walk-up music is from "The Lion King".  What could he possibly have done to get that kind of reaction from you? You have a parking spot?  How are you even able to drive a car?  Who are you?  Toonces? 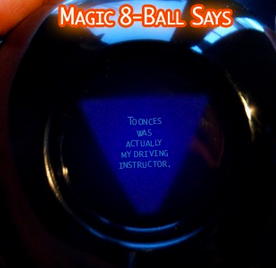 I think my head's about to explode.  Before it does, just give me your prediction on the Mets' final record this year and where they will finish in the division. 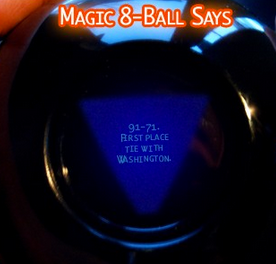 Wait, they're going to finish tied for first with the Nationals?  So who wins the tiebreaker?  Is the loser of the tiebreaker the wild card team or do they miss the playoffs altogether? 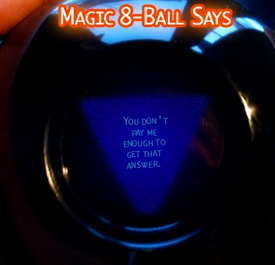 Why that no good son of a...  I hope you drive off a cliff with Toonces!

On that note, I think it's best if we just move away from the Magic 8-Ball and move into the 2017 baseball season.  It's been a long off-season, especially after Conor Gillaspie happened.  But like Mark McGwire once said, we're not here to talk about the past.  So let's look forward to the season that's about to begin for the Mets on Monday.  There's plenty to be excited about in 2017.

There's the return of Zack Wheeler.  There's also a ton of offensive talent playing in the final years of their contracts, which means players like Curtis Granderson, Neil Walker and Jose Reyes will be super motivated to have great seasons so they can earn another lucrative deal.  (Jay Bruce is also playing for a new contract, but I didn't mention him because I was only talking about talented offensive players.)

I hope you're looking forward to the upcoming season as much as I am.  And I certainly hope you're more optimistic about your favorite Mets players than a certain plastic prognosticator is.

Until next time, I hope you enjoy all the Opening Day festivities on Monday.  And remember, please help control the sarcastic sphere population by having your Magic 8-Ball spayed or neutered.


Hey, kids!  The Magic 8-Ball has been making predictions since 2010, the year Jason Bay first soiled us with his presence.  To see what the Magic 8-Ball said prior to each of the previous seven seasons, please click on the links below:

Scribbled by Ed Leyro (and Joey Beartran) at 11:00 PM No comments: