On Wednesday night, the Studious Metsimus staff was invited to attend a special Q & A session for Mets season ticket holders at Citi Field.  Master of ceremonies Kevin Burkhardt was there, as well as general manager Sandy Alderson and his merry men (from left to right - John Ricco, Paul DePodesta and J.P. Ricciardi).

For 45 minutes, the front office foursome fielded questions from the audience, which included yours truly, Studious Metsimus roving reporter/culinary expert Joey Beartran, and my Gal For All Seasons (The Coop).

Kevin Burkhardt began the session by introducing the four members of the Mets' front office, then gave the floor to Sandy Alderson.  Alderson opened the evening's events with a thoughtful and well-rehearsed monologue, which included this zinger after he started to discuss the state of the bullpen as it currently stands:

"I'm not sure how we can end up with a not-improved bullpen."


Alderson and his Super Best Friends tackled a rapid barrage of questions from concerned season ticket holders.  From questions about the outfield to how long it was taking for the team to improve to a shocker about whose idea it was not to spend exorbitant amounts of money during the off-season, the members of the front office did not shy away from any of the fans' questions.

When asked about the reason why it's taking so long for the team to be competitive, Alderson said that he doesn't want to buy, buy, buy just to satisfy the short-term needs of the team.  He summarized by saying:

"We don't want to be there one year and gone the next."


A concerned fan asked Alderson why the team is still unwilling to spend money, to which the general manager gave an unexpected answer:

"The reason we haven't spent the money is not because of Fred Wilpon or Saul Katz.  It's because of me."


Of course, one of the hot topics of the evening was the status of the Mets' outfield.  In responding to one fan's question on the outfield, Alderson said the team created a list of all available outfielders that they would consider.  Entering this week, only two outfielders remained on that list.  One was Michael Bourn, who Alderson admitted would not become a Met if the team was forced to give up its 11th pick in next year's amateur draft.  The other was just signed by the Yankees.  Who was that coveted outfielder?  Sandy, take it away!


Yup, you heard him right.  Apparently, Juan Rivera was on the shrinking list of outfielders the Mets were considering.  That's the same Juan Rivera who hasn't had a productive season since 2009.  Kinda sounds like Jason Bay.

It wasn't just a Sandy Party at the Q & A session.  His three assistants/associates/yes men also got a chance to field questions.  They were asked which players they were excited to see in spring training that might be flying under the radar.  Their responses?

"Jack Leathersich.  He reminds me of Josh Edgin ... he struck out well over a batter per inning last year at two minor league levels."

"Collin Cowgill.  T.C. [Terry Collins] will like him.  He can play all three outfield positions.  Zzzzzzzzz."

I don't know what to think of Ricciardi's assessment of Leathersich.  He says Leathersich reminds him of a pitcher who had a 4.56 ERA with the Mets in 2012 and allowed a homer every five innings he pitched.  I'd like someone a little better than that in my bullpen, please.

DePodesta painted an impressive picture of Montero.  It's too bad he's due to begin the season at AA-Binghamton.  He might not make an impact at the major league level until 2014.

As for Ricco's "review" of Cowgill ... uh ...he didn't exactly say much or give us anything to get excited about.  Then again, he looked a little like the fifth Beatle when he was up on stage, perhaps wondering what his former crony, Omar Minaya, was up to.  Then he fell asleep.

Finally, my Gal For All Seasons got to ask her question.  She asked Alderson what the status of Dillon Gee was, especially considering that he was shut down early in 2012 and that very little news of his recovery effort has been documented in the media.  Alderson made her and the audience smile when he said:

"We're very confident that he's going to be ready to go, that he'll be on the staff on Opening Day."


Sandy Alderson, John Ricco, Paul DePodesta and J.P. Ricciardi were forthright in their responses to some difficult questions by the fans.  They did not hide from any of the questions and seemed to create a positive buzz for the team when the night was over.

After the session was over, the foursome posed for pictures and had one-on-one conversations with various members of the audience (myself included).  Alderson admitted to me that he does read Mets blogs, but usually sticks to ones that are well-researched (ahem).  He was not a fan of Mets blogs written by people who speak negatively of the team and its operations without backing up their claims.

He then posed for one photo with a certain member of the Studious Metsimus staff.  Upon taking the photo, he gulped and said "I'm sure this is going to go viral." 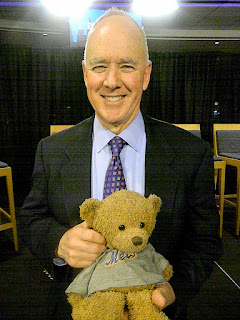 The Studious Metsimus staff would like to thank Sandy Alderson and his Super Best Friends for sharing part of their evening with the fans.  Now it's up to them to put together a team we can all be thankful for.

Scribbled by Ed Leyro (and Joey Beartran) at 10:57 PM No comments:

What Should The Mets Do With Jordany Valdespin?


In 2012, Jordany Valdespin put his name in the Mets record book with one swing of the bat, crushing a three-run homer off Phillies closer Jonathan Papelbon on May 7 for his first major league hit.  The homer propelled the Mets to a 5-2 victory over their division rival in Philadelphia.

Valdespin had a knack for providing big blasts off the bench in 2012, as his five pinch-hit homers broke the Mets franchise record set by Danny Heep in 1983 and tied by Mark Carreon in 1989.  Overall, Valdespin hit eight home runs for the Mets last year.  But his ability to hit the ball out of the park wasn't his only talent.

The 25-year-old from the Dominican Republic produced a total of 18 extra-base hits, scored 28 runs, collected 26 RBIs and stole 10 bases for the Mets in 2012, all without reaching 200 official at-bats.  Do you know how many Mets in team history have produced 18+ XBH, 28+ runs scored, 26+ RBIs and 10+ SB in the same season, regardless of the number of times they came up to the plate?  The answer is quite a handful, with the majority of the players doing it in full seasons of 500 or more at-bats.  But how many of them did it in as few a number of at-bats as Valdespin collected?  The answer is zero.

Let's just consider those players who, in 300 at-bats or fewer, matched or surpassed the number of extra-base hits, runs scored, RBIs and stolen bases that Valdespin achieved for the Mets in 2012.