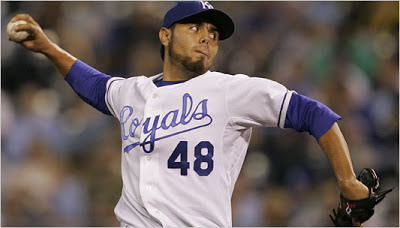 Twitter has been abuzz this afternoon with the news that former Yankees closer Rafael Soriano and Royals closer Joakim Soria are available for the taking, with Soriano opting out of his contract and Soria having his option declined by the Royals.

As far as my own thoughts on the topic go, I can sum it up in two words.  (Or is it four?)  And those words are: Soria-NO!  Soria-YES!

Rafael Soriano is coming off a fantastic season with the Yankees, saving 42 games after taking over for the injured Mariano Rivera.  His 2.26 ERA was also stellar, as were his 69 strikeouts in 67⅔ innings.  But Soriano will be 33 in December and made $11 million last year.  Those are big no-nos in the Sandy Alderson School of Business.

Meanwhile, Joakim Soria is coming off a disappointing season in 2011, a season that ended with Tommy John surgery.  In 2012, Soria didn't throw a pitch, but made $6 million in the final year of a four-year deal he signed prior to the 2009 season.  Prior to his surgery, Soria finished 2011 with 28 saves and a 4.03 ERA, allowing nearly one hit per inning.  Despite his unspectacular ERA, the 27-year-old's numbers in other categories were fairly similar to what they had been in previous seasons.

From 2007 to 2010, Soria was one of the most dominant closers in baseball who toiled in obscurity as a member of the Royals.  In those four seasons, Soria saved 132 games for a Kansas City team that finished a combined 96 games below .500.  Soria also was the proud owner of a 2.01 ERA, 0.99 WHIP and averaged nearly ten strikeouts per nine innings (281 Ks in 255 IP).  That wasn't over one season.  That was over FOUR YEARS!

Although his 4.03 ERA and 1.28 WHIP were departures from his 2007-2010 numbers, he kept his walks low (17 BB in 60⅓ innings) and still struck out approximately one batter per inning.  And let me remind you again that Soria is only 27 years old!

Considering that Soriano had a great year filling in for the man considered to be the greatest closer of all time, it would probably not be a stretch to say he will command a raise from his $11 million salary in 2012.  Meanwhile, Soria is coming off Tommy John surgery and the worst season of his career, although it was still better than the one Frank Francisco gave the Mets in 2012.  After making $6 million for the Royals in the final year of his contract, it would not be unreasonable to suggest that he will make a similar amount in 2013.

Frank Francisco is due to make $6 million in 2013.  Joakim Soria is younger and has a better track record than Francisco.  Plus, he achieved his success pitching for a team that has won fewer games than the Mets over the past four seasons.  And of course, he won't turn 28 until next May, whereas Francisco, like Soriano, is already 33.

The Mets are committed to signing David Wright to a long-term deal.  But their other big need they need to address is their bullpen.  Statistically speaking, the Mets had the worst bullpen in the majors in 2012.  That needs to change in 2013.  And Joakim Soria, who is already throwing and should be ready for spring training, could be the first piece in what should be a very different bullpen in 2013.

It's time to stop adding relievers who are already in their 30s (Francisco, Byrdak, Rauch) and start getting younger in the bullpen.  Joakim Soria would be a step in the right direction for this team.  Let's see if Sandy Alderson will get it right this time when it comes to putting together a solid bullpen.
Scribbled by Ed Leyro (and Joey Beartran) at 2:21 PM 2 comments:

Dickey or Santana: Who Gets The Opening Day Nod? 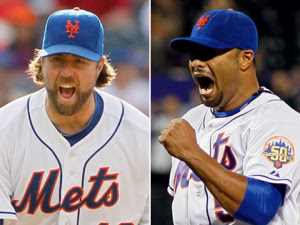 Since becoming a Met in 2008, Johan Santana has been the team's Opening Day starting pitcher when he's been healthy enough to do so.  Despite missing the last month of the 2010 season and all of the 2011 season, Santana was given the ball on Opening Day 2012, albeit with a strict pitch count.  Santana pitched five scoreless innings against the Atlanta Braves, helping the Mets to a 1-0 Opening Day victory.

But after a strong start, capped by his historic no-hitter against the Cardinals, Santana struggled mightily.  After pitching his gem on June 1, Santana made ten starts.  In those ten starts, the southpaw had an 8.27 ERA and 1.76 WHIP, with opponents hitting .327 against him.  Compare that to his first 11 starts, which culminated with the no-hitter.  In those games, Santana was superb (2.38 ERA, 1.03 WHIP, .200 batting average against).

R.A. Dickey, on the other hand, was consistently good all year, and at times was absolutely phenomenal.

In the past, teams have given the ball to the pitcher with the reputation, and in some cases, the big-dollar contract.  When healthy, Johan Santana has been one of the top pitchers in the game for the better part of the last decade.  Meanwhile, Dickey had his first dominant season in 2012, although his previous two seasons in New York were quite good.

Given that bit of information, it would seem as if Johan Santana should get the ball on April 1, with Dickey taking the hill on Opening Day II.  However, if the Mets want to truly reward Dickey, who was denied the honor of starting the All-Star Game in 2012, then Terry Collins should write his name on the lineup card on Opening Day.

Let's face it.  Santana gave us one of the biggest thrills in 2012 by pitching the franchise's first no-hitter.  No Mets fan will ever forget where he or she was when David Freese swung through Santana's 134th pitch that night.  But considering how "un-Santana-like" he was after that game and the fact that he was shut down in the middle of August, the Mets shouldn't take a chance on starting Santana on Opening Day.  Santana has already gotten the ball four times on the season's first day.  He's gotten his respect.  Now it's time for him and team management to respect the team's new ace and give R.A. Dickey the ball on Opening Day.

Dickey's story has been a tremendous one to follow.  He's literally been through hell and back to make it to where he is today.  Although he is only due to make $5 million in 2013, which is less than 20% of Santana's $25.5 million salary for the year, Dickey has earned the right to be the Mets' Opening Day starting pitcher.

By giving the ball to Dickey on April 1, it allows Santana to face opponents' non-aces, giving the Mets a better opportunity to win, especially if Santana cannot go deep into games or pitches as ineffectively as he did after his no-hitter.  Dickey fared extremely well against the best of the best in the National League, defeating the likes of Cliff Lee, Mark Buehrle, Lance Lynn, Gio Gonzalez, Josh Johnson and Adam Wainwright, to name a few.  He also defeated Tampa Bay's David Price by tossing a one-hitter against the Rays, the first of his two consecutive one-hitters in 2012.

When healthy, Johan Santana has been an incredible pitcher, one who is more than deserving of an Opening Day start.  But the torch has now been passed.

R.A. Dickey is the new ace of the squad, and deserves to get the ball on Opening Day.  Dickey set a franchise record by earning 27.0% of the team's wins in 2012.  Without question, he'll give the Mets their best chance to start the 2013 campaign with a 1-0 record.

Dickey has climbed over many hills to get to where he is today.  He should be allowed to climb one more hill on Opening Day.
Scribbled by Ed Leyro (and Joey Beartran) at 12:52 PM No comments:

The Ring Is The Thing ... Just Not In Flushing

Last night, the San Francisco Giants swept their way to their second World Series title in three years.  Meanwhile, it's been 26 years (and counting) since the Mets won their last championship.

Mets fans have proudly been wearing their team colors year after year hoping to see the team claim what has eluded them for over a quarter century.  But some players who have worn those same colors during their time at Shea Stadium and Citi Field have traded them in for another team's colors, winning World Series rings for their new teams while their former fans in New York continue to wait ... and wait ... and wait some more.

Here is a list of players who played for the Mets after the team won its last World Series in 1986 (meaning those players never won a title wearing orange and blue), then left New York to became part of a world championship team elsewhere.  You'll see the player's name, followed by the year or years he played for the Mets, and capped off by when he won a World Series ring for another team.  The list, unfortunately, is longer than we'd like.