On Tuesday, January 21, the National Baseball Hall of Fame will be reaching out to its newest enshrinees to inform them that they should cancel all plans for the final weekend in July because they'll be going to Cooperstown instead.  Those all-time greats of the game will be joining Ted Simmons and Marvin Miller, who were voted in by the Modern Baseball Era Committee, as the newest members of the hallowed Hall.

Last year, six former players were inducted, including the first player ever to have his name checked off on 100% of the ballots (Mariano Rivera).  In addition to Rivera, fellow pitchers Lee Smith, Mike Mussina and the late Roy Halladay received the game's greatest individual honor, as well as a pair of designated hitters (Harold Baines and Edgar Martinez).

This year's class does not appear to be as crowded as last year's, if we're to believe Ryan Thibodaux's Hall of Fame ballot tracker.  But that doesn't mean hotels in Cooperstown will be hanging vacancy signs outside their doors.  On the contrary, one potential enshrinee might attract fans from California to Kalamazoo, while another could bring the entire population of Canada with him.  And then there are those who would just show up to boo in the event a seven-time MVP and seven-time Cy Young Award recipient are inducted, not to mention an outspoken pitcher who contributed to two bitter postseason defeats of one of New York's baseball teams.  (Spoiler alert:  It's not the Mets.)

There are seven former Mets on this year's ballot, but no one is expecting Billy Wagner, Gary Sheffield, Jeff Kent, J.J. Putz, Heath Bell, Bobby Abreu or the great Jose Valverde to give a speech on July 26.  For them to get up on stage at the Clark Sports Center, they would each need approximately 309 votes, or 75% of the 412 ballots cast.  Either that or they could channel their inner Kanye West and pretend one of the actual inductees is Taylor Swift.

The cast and crew of Studious Metsimus aren't eligible to vote for this year's Hall of Fame induction class.  (We were told that it had something to do with the fact that we're not actual writers.)  But we are eligible to submit an opinion as to who we'd like to see immortalized with a plaque in Cooperstown.  Just like the BBWAA, we'll limit our selections to a maximum of ten deserving candidates.  Or nine deserving players and a guy with balls on his face.  Here's our imaginary vote!

The best everyday player to come out of Canada hasn't gotten as much support as he should because of one nagging element - the Coors Field factor.

Prior to becoming a member of the Colorado Rockies, Walker was already a good hitter and complete player.  In his final three years with his original team, the Montreal Expos, Walker had a .294 batting average, .371 on-base percentage and .516 slugging percentage, averaging 33 doubles, 21 HR, 88 RBI and 21 SB.  He was also an All-Star, won a Silver Slugger Award and two Gold Gloves while in Montreal.  Although those numbers are not quite Hall of Fame worthy, they were still very good.  Then he signed with Colorado and became one of the best players in the major leagues.

If you thought Larry Walker's 72.7 bWAR was high, you should see Curt Schilling's.  His 79.5 bWAR fully shows how valuable he was to his teams.  And by teams, I'm talking about the Philadelphia Phillies (who won a pennant with Schilling in 1993), the Arizona Diamondbacks (who won their first and only title in 2001 with World Series co-MVP Schilling leading the way) and the Boston Red Sox (who ended an 86-year championship drought with Schilling in 2004 and then repeated the feat three years later in the right-hander's final active season).

Curt Schilling has waited long enough to finally have his day in Cooperstown.  That wait should come to an end this year.

Rolen won the National League Rookie of the Year Award in 1997 and his eight Gold Gloves at third base were more than anyone not named Brooks Robinson or Mike Schmidt.  The seven-time All-Star also produced in the postseason, helping the Cardinals win their first N.L. pennant in 17 years by batting .310 with a 1.044 OPS in the 2004 NLCS.  Two years later, Rolen was a key contributor in St. Louis' first World Series victory in 24 seasons, hitting .421 with a 1.213 OPS in the Fall Classic.


Although voters are allowed to check off a maximum of ten players on their Hall of Fame ballots, there are only four other players we'd vote for if, you know, we were allowed to vote.

So who will actually get the coveted call from the Hall?  The answer will be revealed to all on January 21, or earlier if any Astros players intercept that information. 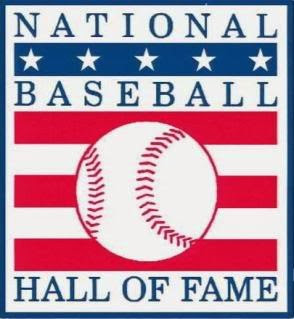 Scribbled by Ed Leyro (and Joey Beartran) at 10:00 AM No comments: