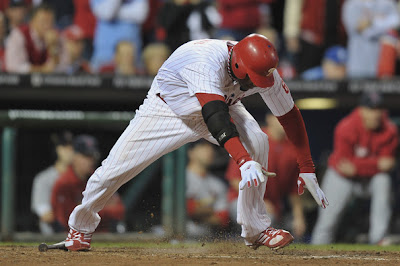 In making the final out of the Phillies' season for the second straight year, Ryan Howard suffered an apparent Achilles injury, falling to the ground and writhing in pain as the Cardinals celebrated their unlikely division series victory.  In a worst-case scenario (torn ACL), Howard would miss nine months or more while recovering from surgery to repair the tear.  In other words, Howard's 2012 season would be kaput.

Although Ryan Howard batted only .253 for the Phillies in 2011, he was their main power source, providing 33 HR and 116 RBI in 152 games.  For a team that plays half of its games in a hitter-friendly ballpark, Howard was the only player to hit over 20 HR.  Free-agent-to-be Raul Ibañez was second on the team with exactly 20 HR and 84 RBI.  Take out Howard and the soon-to-be 40-year-old Ibañez, and no Phillie hit more than 17 HR (Shane Victorino, of all people, hit 17 bombs) or picked up more than 63 RBI (accomplished by Jimmy Rollins, another free-agent-to-be who has already gone on the record as saying he won't accept a hometown discount to re-sign with the Phillies).

Now take Howard and Ibañez out of that lineup and what do you have left?  A declining and oft-injured second baseman in Chase Utley, an as-yet unsigned shortstop who will be 33 in November and who has a career OBP of .329 primarily out of the leadoff spot in the batting order, and a 36-year-old third baseman who produced a .277, 5 HR, 50 RBI season in 122 games played (numbers eerily similar to Justin Turner's 2011 season). Basically, the Phillies offense will be led by Shane Victorino and Hunter Pence.  I mean, catcher Carlos Ruiz led all Phillies' starters (minimum 100 games played as a Phillie) in batting average with a .283 mark.  When your most consistent hitter over a full season is Carlos Ruiz, that says a lot about your offense. 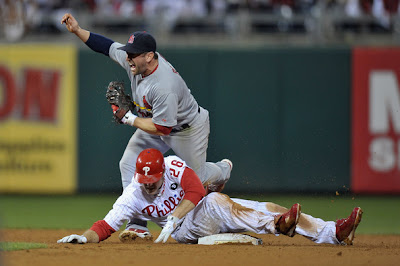 Like the rest of his teammates, Chase Utley is literally down and out.

If Jimmy Rollins doesn't return, who will be their starting shortstop?  (It better not be Jose Reyes.)  Surely, they can't entrust the position to Wilson Valdez, he of the .294 OBP in 2011?  But maybe his defense is better than Rollins.  Uh, actually it's not.  Rollins played in 142 games and made only seven errors, while Valdez played in 99 games and committed nine errors.

Ever since Scott Rolen showed his brotherly love for Philadelphia by leaving the city in a trade in 2002, the Phillies have been searching for his replacement.  They tried David Bell from 2003-2006 and got nothing.  They employed a trio of third sackers in 2007 (Greg Dobbs, Wes Helms, Abraham Nuñez), all of whom started at least 50 games at the hot corner.  They tried Pete Happy (Pedro Feliz) for two seasons in 2008 and 2009, before finally settling on Placido Polanco in 2010.  This is the same Placido Polanco who was acquired in the Scott Rolen trade in 2002 and replaced him at third base for the remainder of that season before moving over to second base in 2003 and 2004 to accommodate David Bell.  Once Chase Utley was called up to the team, Polanco was out of a job and was traded to Detroit in 2005, where he blossomed, hitting .311 in four seasons with the Tigers.  So of course, the Phillies re-signed him prior to the 2010 season and have seen his numbers wilt.

As of right now, Hunter Pence is the only regular position player on the Phillies who isn't north of age 30.  The pitching staff of Halladay, Lee, Hamels and Oswalt might be truncated by one in 2012, as Roy Oswalt has a $16 mutual option for the 2012 season.  However, Oswalt went 9-10 for a team that won 102 games, finished the year with his second-highest ERA over a full season in his 11-year career, and spent almost two months on the disabled list.  If the Phillies think that's worth $16 million, who am I to stop them?

Vance Worley might be able to replace Oswalt in the rotation, but is he for real?  In parts of two seasons with the Phillies, Worley is 12-4 with a 2.86 ERA in 23 starts.  But this great start wasn't something that could have been predicted after looking at his numbers in the minor leagues.  Worley started 76 games over parts of four seasons in the minors.  In those starts, he was barely above .500, going 25-23.  His ERA was unimpressive (3.80) and his WHIP (1.25) wasn't exactly among the league leaders.  He also wasn't a strikeout pitcher in the minors, averaging 6.9 strikeouts per nine innings.  Then he comes to the major leagues, where hitters aren't familiar with him and he lowers his ERA by a full run, while upping his strikeout rate to 8.1 K/9 IP.  At least Cole Hamels' major league success followed an impressive minor league career, one in which he went 14-4 with a 1.43 ERA, 0.95 WHIP and registered 12.4 strikeouts per nine innings. 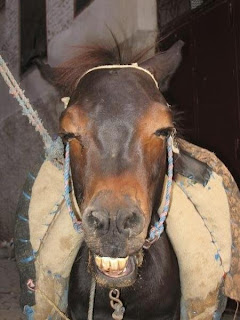 You didn't think I'd mention Cole Hamels and not show his photo, did you?

There are too many question marks surrounding the Phillies in 2012.  Their position players are getting older and piling up more injuries.  Their main source for power might miss the entire 2012 season, a season in which his new five-year, $125 million contract kicks in.  Their left side of the infield might consist of Placido Polanco and Wilson Valdez, two players in their mid-30s, who combined for six home runs and 80 RBI in 2011.  If John Mayberry (15 HR, 49 RBI in 104 games) becomes the Phillies' main power source in 2012, their lineup won't look very scary at all.

Roy Halladay and Cliff Lee might continue to be All-Star-caliber pitchers for years to come.  Or maybe they'll both realize that they're entering their mid-30s and will suffer the same setbacks the other thirty-somethings on the Phillies are.  The Phillies are in more trouble than people think.  Their seasons are ending earlier year after year (World Series losers in 2009, NLCS losers in 2010, NLDS losers in 2011), and that may be a sign of things to come.

For a team like the Mets, the gap between them and the Phillies might be as wide as it's going to get.  The Mets might not have to shorten that gap on their own.  The Phillies might be helping them do it with their multiple albatross contracts and their inevitable meeting with Father Time.  And it all began last night, when Ryan Howard's Achilles decided to go kaplooey.  Because of it, the Phillies' dominance in the National League might soon be going kaplooey as well.

Great work, Ed. Fact is, no team (other than the NYY and the Braves of the 90s and early 2000s) can maintain the type of run the Phils have had. Age, injury, and the progress of other teams will catch up eventually. Add in the Braves collapse, and the warts that began to show in their vaunted bullpen, and maybe the NL East is coming back to the Mets a little bit.

Wow! Fantastic article. I'm a sucker for a post filled with stats that is packaged around amusing tidbits. Enough of the ego boost Ed. You know yo're talented.

As far as the content, you are spot on. The Phillies are not getting younger. Also, I have told all my Philly friends this too, they have sold their farm for the present. What do they have in the minors to replace these injuries? Nothing.

The Mets had Nick Evans to replace Ike. They had Tejada for Murphy. They were able to plug the holes. If they hadn't had the amount of injuries they had, the outcome would have been very different in Queens.

I don't see the Phillies having the talent in their minors to regroup from this many injuries and aging players. No dynasty lasts forever. They are the latest version of the 90's Braves. Great insight Ed.

Thanks, guys. After seeing their performance in the NLDS, I'm wondering how the Phillies won 102 regular season games. Sure they had three great starting pitchers, but so does Milwaukee in Gallardo, Greinke and Marcum. Those three starters went 46-23 between them. I'm more scared of the Brewers' offense than the Phillies' offense and Milwaukee "only" won 96 games.