Hall of Famer Barry Larkin Was Almost a Met 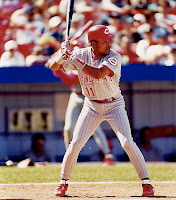 Barry Larkin, the dynamic shortstop who played for nearly two decades as a member of the Cincinnati Reds, was the sole player chosen today by the Baseball Writers Association of America for induction into the National Baseball Hall of Fame.  He will join the late Ron Santo, who was voted in by the Golden Era Committee last month.

Larkin played in 2,180 games in the major leagues, all with the same team.  Only 26 players in major league history have played in more games exclusively for one team.  But that would not have been the case had then-Mets general manager Steve Phillips been able to get Larkin to say "yes" on July 22, 2000.

Twelve years ago, the Mets were in the midst of a heated race with the Atlanta Braves for the NL East lead.  But shortstop Rey Ordoñez had suffered what became a season-ending arm injury in late May and the Mets needed a replacement.  Kurt Abbott and Melvin Mora split the duties at short in Ordoñez's absence, but neither provided the defensive wizardry Rey gave the team.

At first, the Mets didn't appear to miss Ordoñez much.  On July 1, the Mets stood one game behind the first place Braves in the NL East.  But over the next three weeks, the Mets lost 11 of 17 games to fall six games behind Atlanta.  They needed a quick fix at short, one that was not being solved internally by Abbott and Mora.  That was when Steve Phillips turned to Cincinnati and their longtime shortstop.

A trade centered around Mets' top prospect Alex Escobar was offered to Reds' GM Jim Bowden, who accepted the deal.  However, with Larkin being a 10-and-5 player, it was his right to decline the trade if he chose to do so.  The Mets were given a 72-hour window to negotiate with Larkin and his agent, Eric Goldschmidt, but were unwilling to offer the All-Star shortstop a multi-year contract.

As a result, Larkin chose to stay in Cincinnati, where he played until his retirement in 2004.  The Mets eventually did make a trade for a shortstop, acquiring Mike Bordick from the Baltimore Orioles in exchange for Melvin Mora and three other players.  Mora became a two-time All-Star with the Orioles, hitting over .300 twice and producing two 100-RBI campaigns.  Bordick played in 56 games for the Mets before re-signing with the Orioles prior to the 2001 season.

It's impossible to say what Larkin would have done had he played his final four seasons as a Met.  Injuries limited him to 45 games in 2001 and 70 games in 2003.  But at least with Larkin, the Mets would not have had to deal Melvin Mora before he blossomed into an All-Star and they would have had an All-Star of their own at short as they made their run to the 2000 National League pennant.

Barry Larkin is the 31st former Red to be inducted into the Hall of Fame and the ninth who played primarily for Cincinnati.  There have only been 11 former Mets to get the call to Cooperstown and the only one wearing a Mets cap on his plaque is Tom Seaver.  (Lest we forget, Seaver is also one of the 31 former Reds in the Hall of Fame.)

Had Larkin accepted his trade to the Mets in 2000, he could have become the 12th former Met in the Hall of Fame.  Instead, he chose to remain in Cincinnati to punch his ticket to Cooperstown while the Mets got 56 games of Mike Bordick as a consolation prize and a World Series loss to the Yankees.  Even the non-trades end up being bad trades for the Mets.
Scribbled by Ed Leyro (and Joey Beartran) at 8:13 PM