Buy This Book! (Because We're In It!) 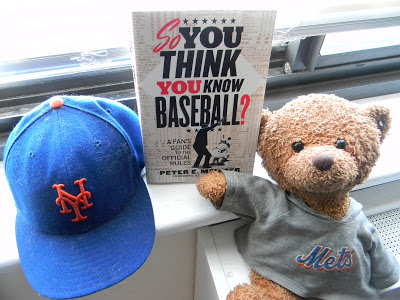 Hello, everyone!  This is Joey Beartran, your favorite Studious Metsimus roving reporter / culinary expert / book critic.  Welcome to a special edition of Bears On Books.  Today, instead of reviewing a book, we're just going to tell you to buy it without a formal review.

I know, I know.  As a respected book critic, it's unprofessional of me to just tell you to buy a book without actually offering a critique on said book, but trust me.  There's a good reason for my behavior.  You see, my Studious Metsimus colleague had one of his blog posts quoted and used as the basis for one of the chapters.

The book is called "So You Think You Know Baseball? : A Fan's Guide To The Official Rules" by Peter E. Meltzer (available for purchase on amazon.com or at your bookstore of choice).  In the book by the noted Phillies fan (but we won't hold that against him), Mr. Meltzer takes various scenarios and explains how umpires would handle them according to the official baseball rule book.  Mr. Meltzer does such a fine job of explaining difficult rules that even the two Adrians (that's umpires Adrian Johnson and Adrian Gonzalez) would have a tough time misinterpreting them.

But the chapter that I recommend highly is Chapter 18.  This is the chapter on base hits that explains when batters should get credit for them.  A piece written by my colleague, Ed Leyro, was considered to help answer a few questions about base hits.  If you haven't purchased the book, I took the liberty of taking some photos of the pages in question, which you can read below.  (I hope Mr. Meltzer doesn't sue me for that.  After all, he is an attorney when he's not writing books.) 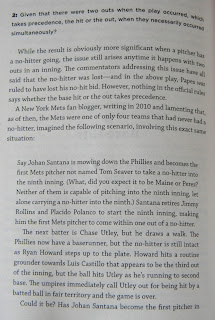 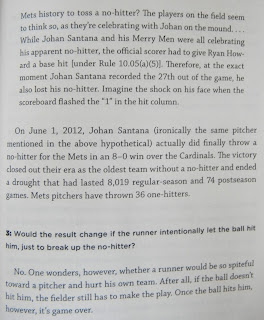 Click on the photos to enlarge in case your vision is as bad as Adrian Johnson's.


For the record, we know that Tom Seaver once pitched 8⅔ innings of no-hit ball against the Chicago Cubs on September 24, 1975.  But he was not one out away from a no-hitter, as the game was scoreless in the ninth.  Since the game was played at Wrigley Field, had Seaver completed nine hitless innings, the game would not have ended with the 27th out.  Seaver would have needed the Mets to take the lead in the top of the 10th and then he could have completed the no-hitter with a hitless tenth.  Therefore, my colleague's hypothetical situation in the left photo above was correct when he stated that Santana would have become the first Mets pitcher to come within one out of a no-hitter.

So what do you think, Mets fans?  Not bad, huh?  And in case you're asking "hey, it just says 'a New York Mets fan blogger' wrote that piece.  Where does it say that it was your colleague who wrote it?", allow me to show you another photo.  This is a photo of the "sources" section of Mr. Meltzer's book and should remove all doubt as to the identity of the so-called "New York Mets fan blogger". 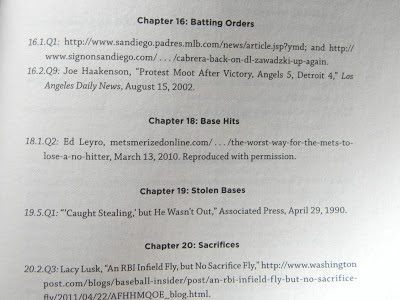 Well, that does it for this special edition of Bears on Books.  My colleague would like to thank Peter E. Meltzer for finding his work worthy enough to be included in his book.  He'd also like to offer his thanks to Joe D. at Mets Merized Online for allowing him to write the original piece on his site.  Hopefully, the mention of MMO as a source in Mr. Meltzer's book will bring additional traffic to a truly wonderful site.

Now if you'll excuse me, I need to get back to my reading.  There are 27 other chapters in the book that I need to read.  Happy reading and never stop believing.  Let's go Mets! 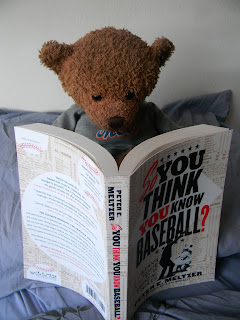 Thanks, Dawg! I guess I should probably write my own book someday. We all know I have enough material for one (or three).