Are Mets Fans Loyal To Their Team? One Survey Says No!

The Mets were a mediocre team in 2010, finishing the season with a 79-83 record. That mark was the 20th best in baseball (or the 11th worst, if you're standing on your head while looking at the standings). That was a nine-game improvement over the dismal 2009 season, when injuries turned the Mets into Johan Santana and the Four Rainouts, but the improvement in the win column was still not good enough to put the fannies in the seats.

It's true that Mets fans did not turn out in droves for the 2010 season, but does that make us any less loyal than other teams' fans? Apparently so, according to a recently conducted survey by Brand Keys, Inc. 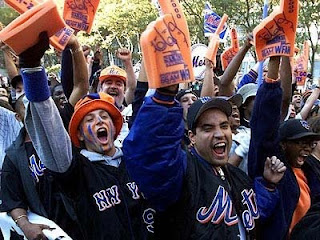 Does this look like a fan base that isn't loyal to their team?
The Mets ranked 23rd out of 30 Major League Baseball teams in fan loyalty. The two teams Mets fans love to hate, the Phillies and the Yankees, finished first and second in fan loyalty, respectively. Finishing third in the survey were the Boston Red Sox, while the San Francisco Giants, who won the 2010 World Series, finished fourth.

I have two issues with this poll, and they're actually not about the Mets. First, how are the Phillies No. 1 on this list? Sure, they attract fans now, but where were these fans prior to the 2007 season?

In 2006, the Phillies did well, finishing only three games behind the Los Angeles Dodgers for the NL wild card berth. Even with the team battling for a playoff spot, their attendance at Citizens Bank Park for the year was only 2,701,815. They ranked seventh in the NL in home attendance, just slightly ahead of the small market San Diego Padres. Once the Phillies started winning division titles in 2007, it became "cool" to go to a Phillies game again in Philadelphia. To me, loyalty is about sticking with your team through thick and thin. Phillies fans love their team when they're in the "thick" of things, but will find something else to do when the team is a little "thin". This brings me to my second issue with the survey.

How are the Cardinals and Cubs not in the top five? For years, we've heard players say that the fans are what make them love playing in St. Louis. The Cardinals fans who were there when they won the World Series in 2006 (home attendance of 3,407,104) were also there in 1997 (home attendance of 3,225,334), when they finished with a 73-89 record and Mark McGwire played most of the season in Oakland. St. Louis perennially draws over 3 million fans through its gates because the fans are LOYAL to their team, regardless of where they are in the standings.

Similarly, the Cubs, a team which has a history of being at the bottom of the standings, also has fans who define team loyalty. The Cubs haven't won a World Series since 1908 and haven't won a National League pennant since 1945, but they still draw over 3 million fans annually. (In 2010, Chicago finished with a 75-87 record, but still drew 3,062,973 fans to Wrigley Field.) They do this despite having one of the smallest seating capacities in the National League.

Only seven teams in baseball supposedly have less loyal fans than the Mets. But for the past decade, the Mets have been among the league leaders in home attendance. So in 2010, attendance at Citi Field dropped by about half a million. Does that place Mets fans among the least loyal in baseball?

Loyalty is not all about selling out every game. It's about being supportive of your team, win or lose. Phillies fans support their team when they're better than the Mets. Where will they be when the Mets surpass them in the standings, whenever that is? Cardinals and Cubs fans have more loyalty in their big toes than Phillies fans will ever have. Let's see what the survey looks like once the Phillies start to decline. Of course, when that day comes, it'll be tough to find a Phillies fan to poll.