Quick! Which starting pitcher on the Mets has the lowest ERA? If you said R.A. Dickey, you'd be correct. Now if I asked you which Mets hurler of the starting five has the fewest wins, you probably wouldn't think to say Dickey's name again. But it's true, with a 5-11 record, R.A. Dickey has the fewest wins of the five pitchers in the starting rotation, one less than Mike Pelfrey's six.

R.A. Dickey is this year's hard-luck pitcher on the Mets, the man who pitches well more often than not, yet never seems to get credit for the victory. The Mets are 11-14 in Dickey's 25 starts, including Monday night's extra-inning victory over the Padres. That means the bullpen is more apt to pick up the victory in a Dickey start than Dickey himself. It's enough to make you scratch your head in disbelief. 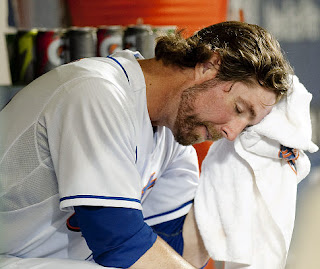 It's okay, R.A. You may not be getting the wins on your record, but you're a winner to Mets fans.

Dickey is not the only pitcher in the majors to be having trouble earning victories despite pitching relatively well. Fellow National Leaguer Hiroki Kuroda has an 8-14 record, leading the league with his 14 losses. However, he is currently eighth in the NL with a 2.88 ERA. Kuroda has given up three earned runs or less in 19 of his 24 starts, but the Dodgers have managed to lose ten of those 19 quality starts. Incredibly, Los Angeles has scored two runs or less in exactly half of Kuroda's 24 starts, giving the 26-year-old righty little room for error.

In the American League, Doug Fister has pitched relatively well this year, splitting his time between Seattle and Detroit. After 24 starts, Fister's ERA is 3.59 and has never been higher than 3.86 at any point this year. However, Fister's won-loss record (4-13) does not seem right compared to his ERA. Like Kuroda, Fister has been highly effective in most of his starts, allowing two earned runs or less 12 times. Incredibly, his teams have lost seven of those 12 starts. Trading the Pacific Northwest for the Motown Mashers has done little to change Fister's luck, as he gave up two earned runs in his second start for Detroit on August 9, only to get a no-decision in a 3-2 loss to the Indians.

It is not uncommon for a good pitcher to suffer hard times in the won-loss column despite pitching well enough to win most of his games. It's especially not uncommon for Mets pitchers to live the hard-luck life.

In 1978, Craig Swan led the National League with a 2.43 ERA. However, Swan only managed to win nine games in 28 starts (losing six and receiving a no-decision in a whopping 13 starts). In 17 of his 28 starts, Swan left the game with the Mets in the lead (12 times) or tied (5 times). Yet, the bullpen couldn't help Swan out. Neither could his offense, as the Mets scored three runs or less in 16 of his 28 starts.

If Swan's 1978 season was enough to make you shake your head, wait till you hear about Jon Matlack's 1974 season. In that year, Matlack pitched 14 complete games (5th in the NL), threw 265.1 innings (7th), had a 2.41 ERA (3rd), recorded a 1.12 WHIP (3rd), struck out 195 batters (4th) and led the league with seven shutouts. He also made the All-Star team for the first time in his career. Sounds like a Cy Young Award candidate, doesn't it? So how many votes did Matlack receive for the National League Cy Young Award in 1974?

Perhaps it was one little stat that caused the voters to look away from Matlack at year's end. You know which one I'm talking about. In 1974, Jon Matlack's won-loss record was 13-15.

Since Matlack threw seven complete game shutouts in '74, that means more than half of his wins came in games in which he allowed no runs in nine innings of work. He basically had to be as close to perfect as possible in order to pick up a win. Of course, with the Mets scoring three runs or less in 19 of his 34 starts, it's no wonder why Matlack finished the season with a losing record. 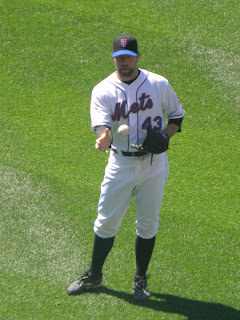 So that brings us to R.A. Dickey. Why is Dickey allergic to victories despite leading the team in ERA for starting pitchers? It's actually a combination of three things. Dickey is being let down by his offense, the bullpen has been a little shaky, and he's been bitten by the bad luck bug.

In 26 games (25 starts), Dickey has left the game with the lead eight times (including Monday night versus the Padres). The bullpen has blown three of those leads. Dickey has also left four games with the score tied. He received no-decisions in all four starts, as the offense failed to take the lead in the next half-inning every time, thereby denying Dickey the possibility of earning the win. The Mets have also scored three runs or less in more than half of Dickey's appearances (14 times in 26 appearances), making it increasingly difficult for R.A. to chalk up the victory.

Luck also has something to do with it. In 2010, opposing hitters' BABIP (Batting Average on Balls In Play) against Dickey was .280, well below the average number of .300. This year, Dickey's BABIP has risen to .293, which is more in line with the league average. Batters are finding more holes and placing their hits in better spots. It's all about luck with this statistic, and Dickey seems to be having nothing but the bad variety this year.

Sometimes all it takes is a clutch hit here or a solid bullpen performance there for a pitcher to rack up the victories. For R.A. Dickey in 2011, he's receiving none of that help. Baseball is a team sport. It's a shame that the team doesn't usually show up whenever R.A. Dickey is on the mound.