A Lesson In Mediocrity: The New York Mets Over The Years

It's a slow news day on the Mets front, so I decided to see if I could find something of interest to write about. I didn't want it to be boring, but I couldn't think of anything exciting to write about either. Basically, I was left with writing something mediocre. And that's when it hit me like an off-kilter slider by Jesse Orosco (47-47 as a Met) or a wayward fastball by Oliver Perez (29-29 as a Met).

This year's Mets team, especially since the All-Star Break, has been hovering at or around the break-even point. A .500 team is usually the definition of mediocrity. So are the 2011 Mets the most mediocre team in Mets history? 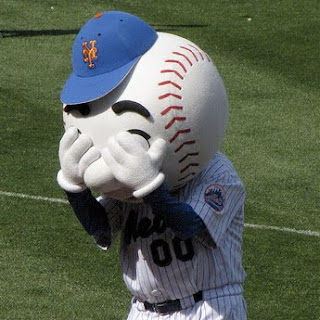 Don't worry, Mr. Met. Every team wins some and loses some. Of course, the Mets are experts at both.

The Mets were so bad in their first few seasons that they didn't reach the .500 mark for the first time until their fifth season. Compare that to the Arizona Diamondbacks, who won the World Series in only their fourth season of existence. And it's not like the Mets reached the .500 mark late in the season. They reached .500 exactly twice in 1966, when they were 1-1 and 2-2. (Their first above-.500 mark came after three games, when they were 2-1.)

The following year, the Mets once again reached the .500 mark exactly twice, registering a 1-1 record after the first two games of 1967 and a 4-4 mark after eight games.

The Mets showed "progress" in 1968, the first year of Gil Hodges' much-too-short tenure as Mets manager, reaching the .500 mark three times. Unfortunately, all three times occurred within the first six games of the season, when the Mets were 1-1, 2-2 and 3-3.

In that miraculous season, the Mets continued their early season .500 trend, going 1-1 and 2-2. They also went above .500 for only the second time in team history, when they were 2-1 after three games. But this time, they decided that mediocrity in April wasn't good enough. On May 21, the Mets reached the .500 mark for the first time after the sixth game of the season, when they improved to 18-18. They reached .500 again ten games later (23-23), then went above .500 to stay on June 3, remaining above the break-even point all the way to the World Series championship.

From 1977-1983, the Mets reached the .500 mark a total of 28 times, with a high of eight during the strike-shortened 1981 season. (Note: The Mets were .500 on three separate occasions during the first half of the '81 season. When they returned from the strike, it was decided by Major League Baseball that each team would play a split season, meaning that every team would begin at 0-0 once play resumed. During the second half of the '81 season, the Mets reached the .500 mark five more times, giving them a total of eight for the entire season.) Other than 1981, no Mets team over a full season reached .500 more than five times during those post-Midnight Massacre campaigns.

In 1997, the Mets experienced another renaissance. After hitting the .500 mark for the second time on May 16, the Mets didn't drop below .500 again until 1999. They were at .500 on three occasions during the 1998 season but always won the following game. The 1999 Mets were exactly a .500 team on four occasions, while the 2000 Mets were at .500 on six occasions on the way to their fourth National League pennant. The 2001 squad spent most of the season below .500 before finishing barely above the mark, stopping at .500 three times along the way.

The 2002 Mets tied the 1970 team by being at .500 on 20 separate occasions. Unfortunately, the 20th time they hit .500 was during their season-changing 12-game losing streak in August. The following year, the Mets reached .500 four times in their first eight games, but dropped below .500 after their ninth game and did not return to the break-even point again in 2003. For the first half of the 2004 season, the Mets flirted with .500 many times, hitting the mark 16 times, before an 11-game losing streak late in the season ended all chances of reaching it for a 17th time. 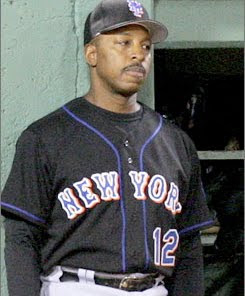 In 2005, the Mets brought in manager Willie Randolph to guide the New Mets of Carlos Beltran and Pedro Martinez. That team reached new non-heights and non-depths in mediocrity, breaking the 35-year-old franchise record for most times at .500, achieving that so-so feat before the All-Star Break. When the Mets won their final game before the Midsummer Classic to improve to 44-44, it marked the 21st time they found themselves at exactly .500. At year's end, the Mets found themselves one exit north of mediocrity, four games over .500 at 83-79, but not before hitting the mark 27 times during the regular season.

This year's Mets stand a good chance to break the 2005 team's record for mediocrity in a single season (27 times at .500). Despite the Mets' recent ability to excel in mediocrity, no Mets team has ever finished at exactly .500 (81-81). The 1975 and 2001 Mets came closest to accomplishing the feat, with both teams finishing their respective seasons with identical 82-80 records. Only the 1975 team went into the final game with a chance to finish at exactly .500. (They entered the season finale with an 81-80 record, but won their final game to avoid the .500 mark.)

Some teams underachieved on their way to mediocrity (see the 2001 Mets), while others rode their mediocrity all the way to the World Series ("Ya Gotta Believe" that I'm talking about the 1973 Mets). The 2011 Mets are somewhere between those teams (which I guess makes them the most mediocre of the mediocre teams), with role players playing above their heads filling in for the injury-plagued starters, while other players have performed below expectations (Jason Bay, Angel Pagan and Mike Pelfrey, to name a few).

For 50 seasons, the Mets have experienced extended periods of success, while also going through various periods of disappointment. The 2011 Mets don't really fall into either category. With 11 more games at the .500 mark, they will officially become the most mediocre Mets team of all-time. But if you've seen this team day in and day out this season, you probably knew that already.

I dont know where you get the time to do all of this amazing research, Ed. So what are you trying to say exactly, that we're just a mediocre .500 team and not really as Amazin as all of us thought we were? ;-) I'm telling Mr. Met on you.

The team might be mediocre, but Mr. Met certainly is not.

Research? What research? I had all of these numbers already in my head. ;)