What Will The Mets Produce Next: A No-Hitter or A 20-Game Winner? 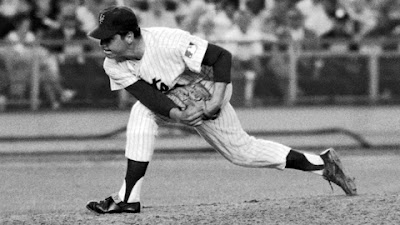 What do the Mets have a better chance of producing?  A no-hitter or a 20-game winner?  On the surface, the question appears to have a simple answer.

Considering that the Mets have had five different pitchers produce a total of eight 20-win seasons (Tom Seaver accomplished the feat four times, while Jerry Koosman, Dwight Gooden, David Cone and Frank Viola each did it once), yet they've never pitched a no-hitter, it would seem that the 20-game winner would be the obvious choice.

But what would appear to be the clear-cut favorite of two things sometimes isn't, as I'm sure fans of the 1988 Mets (boo, Dodgers) and 2006 Mets (boo, Cardinals) can attest.

The five pitchers who won 20 games in a single season for the Mets all experienced great success in the major leagues.  Tom Seaver won 311 games in the big leagues en route to receiving the highest percentage of votes of any Hall of Fame inductee.  Fellow 1969 World Series champion Jerry Koosman finished his career with 222 victories.  Dwight Gooden, David Cone and Frank Viola also had long and successful careers in the major leagues, with Gooden and Cone both winning 194 games and Viola finishing his career with 176 victories.

In addition, four of the five 20-game winners for the Mets also won the Cy Young Award at some point in their careers, with the lone exception being Jerry Koosman, who came tantalizingly close in 1976 when he finished second in the vote to Padres' pitcher (and future Met) Randy Jones.

Here's the kicker.  Although none of the five pitchers ever pitched a no-hitter while in a Mets uniform, three of them (Seaver, Gooden, Cone) accomplished the feat after leaving the Mets, and David Cone took it one step further, pitching a perfect game against the Montreal Expos in 1999 as a member of the New York Yankees.

Tom Seaver never did it as a Met.  Neither did Jerry Koosman, Dwight Gooden, David Cone or Frank Viola.  In fact, no Mets pitcher has ever pitched a no-hitter.  But dozens of Mets hurlers have tossed one-hitters, and not all of them were pitched by All-Stars or future Hall of Famers.  In fact, many of them were pitchers who didn't even win 100 games in the major leagues.

But Jack Hamilton did.  So did Terry Leach, Pete Schourek, Bobby Jones, Aaron Heilman, Jonathon Niese and R.A. Dickey.  What do all of those pitchers have in common?  None of them won 100 games over their major league careers.  Even Shawn Estes, who won four games as a Met, was able to pitch a one-hitter for the team.  (He could pitch a one-hitter, but he couldn't hit one pitcher.  Ah, the Roger Clemens jokes never get old, do they?) 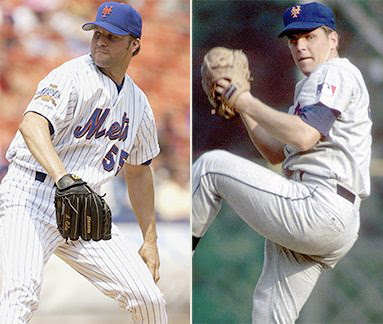 Both Aaron Shawn Estes and George Thomas Seaver were known by their middle names and they both pitched one-hitters for the Mets.  But Seaver would've hit Roger Clemens if he had the chance.

A total of 35 one-hitters have been pitched in club annals.  More than half of them (18) have come after 1990.  Why is that year so important?  Because that was the last time the Mets had a 20-game winner.

Since Frank Viola's 20-win season in 1990, no Met pitcher has reached that level of pitching excellence.  In fact, the closest any pitcher has come was in 1998 when Al Leiter won 17 games for the Mets.

For a pitcher to win 20 games, he has to be consistently good over the course of an entire season.  It also helps to have a good bullpen.  Johan Santana went 16-7 for the 2008 Mets, but the bullpen blew seven games in which he left with the lead, costing him a potential 20-win season.  Meanwhile, to pitch a no-hitter, a pitcher only needs to have one game in which he harnesses all of his "stuff" against opposing hitters.

It's rare for a so-so pitcher to win 20 games.  None of the five pitchers who accomplished the feat for the Mets would be considered "so-so".  In fact, Seaver, Koosman, Gooden, Cone and Viola combined to make the All-Star team a total of 19 times as members of the Mets.

But considering how guys like Terry Leach, Pete Schourek and Aaron Heilman all came within one safety of becoming the first Met to pitch a no-hitter, it goes to show that players with nondescript careers can occasionally show flashes of brilliance.

All one needs to pitch a no-hitter is a nine-inning flash of brilliance.  For a pitcher to win 20 games in a season, he'll need a couple hundred innings of brilliance (and a good bullpen).  John Maine won only 39 games in five seasons as a Met, but came within one Paul Hoover dribbler of pitching a no-hitter.  Jonathon Niese has barely cracked 20 wins over his entire major league career, yet he came within a Chris Denorfia double of pitching a perfect game.  Even Pete Schourek and Shawn Estes, who won 20 games COMBINED over their Mets careers, have one-hitters to their credit.

It's true that the Mets have gone 50 years without a no-hitter, but perhaps we'll see one before we see another 20-game winner in a Mets uniform.  It's been 22 years since Frank Viola became to last Met to record 20 wins in a season.  Since then, there have been 18 occasions in which the Mets have come within one hit of recording the team's first no-hitter.  Common sense and superstition might suggest that the Mets will have another 20-game winner before they record their first no-hitter.  But considering how close the Mets have come to pitching a no-hitter on several occasions over the past two-plus decades, while not having a pitcher even sniff a 20-win season over the same time period might suggest otherwise.

What will Mets' pitchers accomplish next?  Will it be a no-hitter?  Or will it be a 20-win season?  It wouldn't surprise me if it was the former rather than the latter.
Scribbled by Ed Leyro (and Joey Beartran) at 8:22 PM