In 2006, Carlos Beltran came up to bat in the ninth inning of the National League Championship Series.  After hitting a franchise record-tying 41 HR during the season, all he needed was to hit a ball in the gap to score the three runners on base and give the Mets the National League pennant.  He was facing rookie pitcher Adam Wainwright.  The crowd was on its feet, screaming, praying, rally capping - doing whatever they needed to do to help Beltran and the Mets.  Wainwright threw two strikes to Beltran.  The crowd got louder.  Then came a Lord Charles straight out of the Dwight Gooden playbook.  Beltran got a good look at it.  So did the home plate umpire.  Strike three.

For the rest of his Mets career, Beltran was unfairly blamed for anything that went wrong with the team, even if it was kinda sorta tongue-in-cheek.


Second and third, less than two out, rally-killing pop-up?  #BlameBeltran

Finish the toilet paper and don't have an insurance roll at your disposal?  #BlameBeltran

It was very easy to pin the Mets troubles on Beltran.  After all, prior to this year's re-signing of David Wright, no everyday player had ever earned as much money than Carlos Beltran did as a Met.  Plus, everything was going right for the Mets prior to Strike Three.  Nothing has gone right for the team since then.  Although Beltran was a great player during his time with the Mets, he came up short once in a big spot.  But that "once" unfairly became his legacy.

That brings me to the Seattle Seahawks.


As many of you may know, I have been a Seahawks fan almost as long as I've been a Mets fan.  I've been a fan long enough to have watched their previous road playoff victory (December 31, 1983) prior to last week's win at Washington.

The Seahawks lost today to the Atlanta Falcons in heartbreaking fashion.  Down by 20 points entering the fourth quarter, the Seahawks scored three unanswered touchdowns in the final 15 minutes, taking the lead on a 2-yard touchdown run by Marshawn Lynch with 31 seconds remaining.  Unfortunately, that lead did not stand, as the Falcons completed two passes to set up the game-winning 49-yard field goal.

In the second quarter, the Seahawks were at the Falcons' 11-yard line and went for it on 4th-and-1 when they could have attempted a short field goal.  They were stopped short.  At the end of the first half, the Seahawks were once again in field goal range when Russell Wilson was sacked.  Without a time out at their disposal to stop the clock, they did not get their next snap off in time.  No field goal attempt.  No touchdown pass.  No points.

After Lynch scored his go-ahead touchdown and the Falcons drove down the field, Pete Carroll called a time out to "ice" Atlanta's field goal kicker.  Matt Bryant ended up missing the field goal wide right.  But because the play was blown dead because of the time out, Bryant got another chance to be the hero.  This time, he kicked it right down the middle to give the Falcons a 30-28 lead.  Seattle tried one final Hail Mary, but their prayers were left unanswered.

I could place the blame on the play-calling during the two deep second quarter drives into Falcons territory that resulted in no points.  I could blame the rule that allows an opposing team to call a time out a split second before a last-second kick is attempted (a rule I've always disliked).  I could blame Pete Carroll for taking advantage of that rule.

But I'm not.  Instead, I #BlameNoOne.

The Mets were supposed to be the dominant team in 2006.  They steamrolled their way to the NL East title.  They won 97 games when no one else in the National League won more than 88.  They had a lineup that could overcome any deficit the so-so starting rotation gave them.  They had a pretty good closer in Billy Wagner.  But they lost.  And we were left to blame Beltran.

But this year's Seahawks weren't supposed to be much of a factor.  They were coming off four consecutive losing seasons (even if one did produce an unlikely division title) and were trusting their offense to a rookie quarterback - one that was overlooked by every team in the NFL before being drafted by the Seahawks in the third round.

The San Francisco 49ers were the class of the division.  The Green Bay Packers were the perennial favorite to come out of the NFC.  The Seattle Seahawks?  They had pretty-looking new uniforms.  And not much else.

But after a 4-4 start, Russell Wilson played with the poise of a veteran and the heart of a champion.  The rest of the team, especially their frighteningly good Legion of Boom secondary, would not let the team lose.  Seattle finished the season with an 11-5 record, the third-best record in team history.

The Seahawks, much maligned for their inability to win games on the road, won three consecutive road games against the Bears, Bills and Redskins.  Two of those three teams went 10-6 in the regular season (Chicago, Washington).  One of those games came in the playoffs (Washington).  And they came within a last-minute drive and a last-second Hail Mary of winning their fourth straight road game to send them to the NFC Championship Game.

The future is bright in Seattle.  And before long, it will be opposing teams that will be finding people to blame after every loss to the Seahawks.  It's a good time to be a 12. 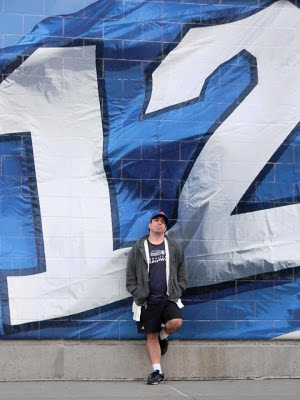