The Year of The Marlins Fan

Today is the first day of the Chinese New Year.  As over one billion members of the Chinese community prepare to usher in the year of the snake, baseball enthusiast in Miami is pumped about 2013 - the year of the Marlin.  Before you assume there was a typo in that last sentence with me not pluralizing the word "enthusiast", take a look at this tweet by Marlins beat writer Joe Capozzi.

Of course, I can imagine most of you probably have sore link-clicking fingers from all the snow shoveling you've done over the past 24 hours.  So for those of you, I made it easier by posting Capozzi's photo below:


According to Capozzi, that was the line for single game tickets about half an hour before they were to go on sale at Marlins Park.  I understand there are four people on line, making them Marlins fans (plural).  But since the Honey Boo Boo show wasn't on at the time, they decided to drive their RV out of the trailer park to be the first in line for Marlins tickets.  Therefore, I consider them to be one fan (singular).

In addition, Capozzi tweeted this photo of something the Marlins fan base and the Mets fan base can relate to:


Finally, to celebrate the Year of the Marlins Fan, I have one more photo to share with you.  It's a photo by Clark Spencer, who is the Marlins beat writer for the Miami Herald.  His photo was taken at the Marlins Winter Warm-Up, which is their way of saying "Fan-Fest".  (Because we all know the Marlins have to be different than every other team in every respect.)

This pretty much sums up what it's like to be a supporter of Miami's baseball team.


It might be called a Winter Warm-Up, but it appears to me that none of those Marlins fan (singular) are warming up at the concessions stand.  It also appears as if the concession stand has more employees than the team has fans (plural).  Guess everyone is saving their appetites for one of the many Hooters "restaurants" in the greater Miami metropolitan area.

So in conclusion, we've learned the following about the Year of the Marlins Fan:

a)  There is still one family in Miami who cares about the Marlins.  Of course, they also still refer to Jeff Conine as "The Franchise" and probably got on the ticket line because they thought it would allow them to use a working toilet as well.

2)  It's nice to see that Marlins fans (plural) and Mets fans can get along, especially when it comes to their respective ownership situation.  As Mets fans, we can't stand the Marlins for their contributions to our team's 2007 and 2008 late-season failures.  But at least we didn't have to deal with Marlins fan (singular) sticking it to us in the Shea Stadium stands during each regular season finale.

iii)  If the Marlins can have a fan fest/winter caravan, why can't the Mets?  I guarantee you at least one Mets fan will show up.  That's more than the Marlins can claim at their Winter Warm-Up.


Mets pitchers and catchers will report to the newly-renamed Tradition Field in Port St. Lucie on Monday.  Their Marlins counterparts will do the same in Jupiter.

Look on the bright side, Marlins fan (singular).  At least you have Mike Piazza Baseball Card Night to look forward to, commemorating his five days in a Marlins uniform.  (Just kidding.  But it could draw an extra fan into the ballpark.) 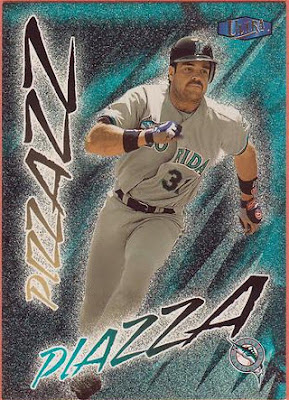 The moral of this story:

It's still good to be a Mets fan.  Marlins fans wish they could say the same.