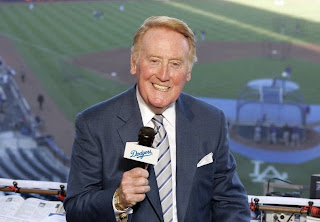 Bronx-born Vin Scully will be back in the broadcast booth for the Los Angeles Dodgers for a record 61st season in 2010. No other broadcaster has spent so many consecutive years working for the same team in baseball history.

In 1950, Scully began his broadcasting career working in the Brooklyn Dodgers' radio and television booth alongside Red Barber and Connie Desmond. When the Dodgers moved to Los Angeles following the 1957 season, Scully left his roots behind but brought along his Hall-of-Fame voice with him.

In addition to baseball, Scully also called NFL games for CBS from 1972 to 1982. He left football after the 1982 season to work as a baseball broadcaster for NBC. Longtime Mets fans might remember one particular call from Scully during the 1986 World Series.

"Little roller up along first. Behind the bag! It gets through Buckner! Here comes Knight and the Mets win it!" 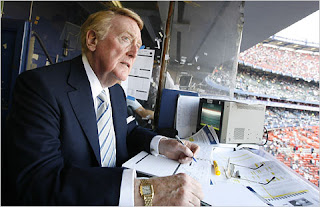 Vin Scully and Shea Stadium. Can't help but feel nostalgic for 1986.
That wasn't the first time Scully had mentioned Bill Buckner's name in a memorable call. Back in 1974, Hank Aaron hit his record-breaking 715th home run against Dodger pitcher Al Downing. A young Bill Buckner was the leftfielder in that game for the Dodgers so he got a perfect view of the home run while he was chasing it towards the left field fence.

Naturally, since the feat came against the Dodgers, Scully was in the ballpark calling the game. Here was his call when Aaron made history. 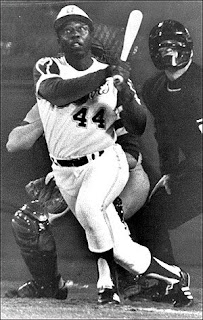 "It's a long drive to deep left. Buckner to the fence. It is gone!"

After a short pause (similar to his pause after Ray Knight scored the winning run on October 25, 1986), Scully offered this to baseball fans.

Vin Scully has never been about himself. He has always been about the game. For sixty seasons, he has taken out his canvas in the broadcast booth and painted a beautiful picture for baseball fans to watch and listen to.

In 2010, Hall-of-Famer Vin Scully will be entering his 61st season as a Dodger broadcaster. If you ever watch a Mets game against the Dodgers and can get the audio of Vin Scully, do yourself a favor and listen to it. I'm sure Gary Cohen or Howie Rose won't mind if you do. After all, they owe everything to a legend like Mr. Scully.

He should be inducted into the Hall of Fame again. Knowing he'll be back helps make the MLB internet package worth the price.