Vote For Gary Cohen! Let's Get Him Into The Hall Of Fame! 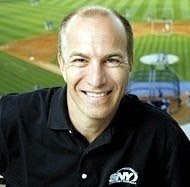 Hey, SMFs! Let's get our fav'rit Mets broadcaster into the National Baseball Hall of Fame! If you have a Facebook account (and you know you do), you can vote for Gary Cohen to receive the 2010 Ford C. Frick Award for excellence in broadcasting.

It's so simple to vote, even a Phillies fan can do it. Here are the instructions:

B) At the top of the page, just under the status message, you will see a line that says "wall, info, events, boxes, photos, poll". Click on "poll", where you will be taken to the page that lists all potential award recipients.

III) Scroll down to Gary Cohen's name and let your finger do the clicking.

There you go, SMFs. It's as easy as that. The best thing about it is that kids DON'T have to ask for their parents' permission to vote, unless if you're grounded and you're not allowed to log on to Facebook. Don't exacerbate things with your parents. If you have been grounded, please leave me a comment here and I will vote for you. After all, multiple votes for the same broadcaster are allowed (and encouraged)!

Thanks for voting! Tell all your friends! Let's get Gary Cohen to Cooperstown without having to buy a ticket for him! He's given us many nights to remember over the radio and now on SNY. Let's give him a weekend to remember in Cooperstown!