Omar Lives By The Rules of The Old Perfesser 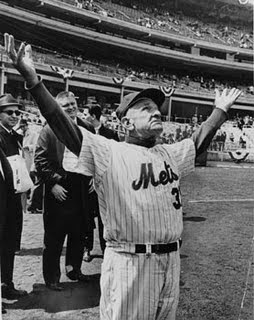 First it was Chris Coste. Then it was Henry Blanco. Earlier today, Joe D at Mets Merized Online posted that the Mets might go after Rod Barajas if they can’t get Bengie Molina. SI.com’s Jon Heyman is now saying that the Mets are considering offering Molina a one-year deal worth $6 million, plus an option for a second year. Heyman states that teams in the larger markets aren’t in need of frontline catchers. Therefore, the Mets feel they can sign Molina since the smaller-market teams are probably not willing to spend as much for catchers when there are less expensive catching options available.

What I’d like to know is this. The Mets have been saying that their top priority at the Winter Meetings is to acquire pitching. If this is indeed the case, then why does it appear that they’re signing or attempting to sign every catcher this side of Hobie Landrith? Is Omar Minaya thinking of Casey Stengel’s famous words when they drafted the aforementioned Landrith with their first pick in the 1961 expansion draft?

When asked about the signing of Landrith when there were other players the Mets could have drafted to become the cornerstone of their fledgling franchise, Stengel said the following: 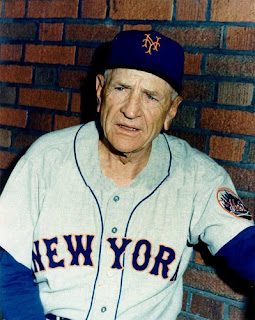 "You gotta have a catcher or you're gonna have a lot of passed balls."

I get that the Mets need a catcher for 2010. Brian Schneider has signed with the Phillies and Omir Santos is not a #1 catcher. But regardless of who the Mets sign to be their top catcher next season, he is not going to be the long-term solution there. It appears as if Josh Thole will be the full-time catcher for the Mets by 2011. The Mets should just settle on one catcher instead of spending all of their Monopoly money on houses for Mediterranean Avenue and Baltic Avenue. If they continue to sign every catcher available, they’re not going to have the resources to put hotels on Park Place and Boardwalk.

Make up your mind, Omar. Do you want to have the fewest passed balls in baseball or do you want to put together the best team so that the fans won’t continue to dress as green seats for games in September? While you were attempting to sign every backstop available, other teams are already signing potential players that would help them, even at catcher. (The Nationals signed Ivan Rodriguez to a two-year deal worth $6 million, according to Yahoo's Tim Brown on his Twitter page.)

I’m usually a patient person, but come on. I’m tired of other teams getting effective players the Mets could have had, while we get scrubs and past-their-prime players. If the Mets come back from the Winter Meetings with their fifth and sixth-string catchers and don’t come back with a top-notch pitcher or their starting leftfielder for 2010, this team might continue to resemble the teams Casey Stengel used to manage. The fans might have bought into it then, but they surely won’t buy into it now.