Pitching In For The Tug McGraw Foundation 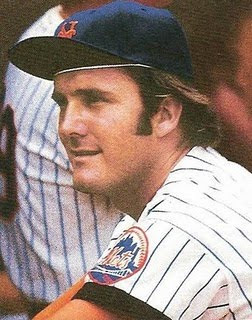 Frank Edwin McGraw, Jr. made his major league debut for the New York Mets in 1965. He was not very effective as a starting pitcher so in 1969, he became a reliever on a full-time basis. Unfortunately, he did not pitch in the 1969 World Series even though he collected 12 saves during the regular season.

After a few mediocre seasons, the Mets appeared to be headed down that same path in 1973. Then the man known to all as Tug fired up the team and its fans when he reminded everyone that the season was not yet over. "Ya Gotta Believe" became the mantra for the underdog Mets as they went from last place in August to winning the division title the day after the regular season ended.

The magic continued in the playoffs as the Mets eliminated heavily favored Cincinnati in the National League Championship Series and took the defending champion Athletics to the seventh game of the World Series before ultimately succumbing to Oakland.

When Tug McGraw was traded from the Mets to the Philadelphia Phillies after the 1974 season, he was the franchise leader in saves and games pitched, a mark which is now held by another lefty who wore #45, John Franco.

McGraw helped the Phillies win their first ever World Series in 1980, recording the final out of the sixth and deciding game against another team seeking their first championship, the Kansas City Royals. He pitched four more seasons in Philadelphia, retiring after the 1984 season. 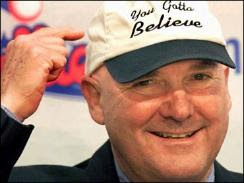 Fast forward to 2003. It was on March 12 that McGraw received the shocking news that he had a malignant, inoperable brain tumor. Although he was only given weeks to live, he managed to live throughout 2003 before finally passing away on January 5, 2004.

Before his death, the Tug McGraw Foundation was established. Its mission is to enhance the quality of life for children and adults with brain tumors and to raise awareness and money for brain tumor research. (Recently, the Foundation was expanded to include Post-Traumatic Stress Disorder and Traumatic Brain Injury.)

In 2003, just months before he passed away, Tug McGraw was in attendance at Shea Stadium. He was signing autographs along with former Met second baseman Felix Millan at the Fan Fest that was held prior to weekend games at Shea. I was in attendance that day, but noticed McGraw and Millan after they had signed their last autographs. I was disappointed, feeling that I had missed my chance to meet McGraw, a man who pitched before my time but was very much a part of what made me into the Mets fan I am today.

As he was leaving, the Tugger picked up a T-shirt that was being given away that day and flung it out to the crowd. (Although he was a southpaw, I'll never forget that he tossed it into the crowd with his right hand.) Guess who caught that shirt? 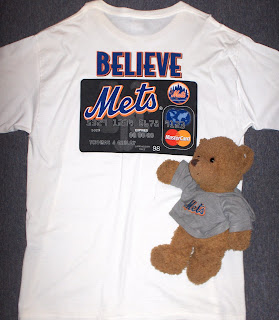 No, it wasn't Joey who caught the shirt. He hadn't even been born yet! He just likes doing his Vanna White impersonation whenever there's a photo op. The shirt above is the one Tug McGraw threw into the crowd that I was fortunate enough to catch. To this day, I have never worn the shirt since his fingerprints are still on it.

Note the "Believe" logo (after Tug's famous phrase) on the shirt, directly over the depiction of a Mets Master Card. If you have a Mets Master Card (or any credit card), perhaps you'd like to make a donation to the Tug McGraw Foundation.

Sharon Chapman, a friend of the Studious Metsimus staff, will be running in the 2010 ING New York City Marathon to raise money for the Tug McGraw Foundation. Her goal is to raise $3,000 for brain tumor research. Please help Sharon reach her goal by clicking here and making a donation to Team McGraw. 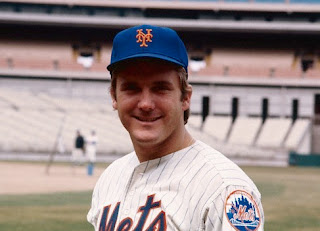 Tug McGraw was a hero to many Mets fans during his tenure with the team. Almost six years after his passing, he is still a hero to many people who are benefiting from the progress being made in brain tumor research due to the Tug McGraw Foundation.

In 1973, Tug McGraw brazenly proclaimed "Ya Gotta Believe" to all the world. With your help, ya gotta believe that the quality of life will improve for people with brain tumors. From all of us at Studious Metsimus, we'd like to thank you for helping Sharon reach her goal and for your support of the Tug McGraw Foundation. We believe. So should you!

Thank you Ed - that was a lovely tribute to Tug. I appreciate your help in publicizing my fundraising efforts :)