We Believe In Home Field Advantage, But What About The Road? 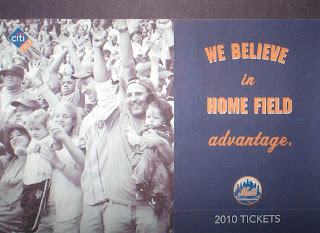 I noticed something interesting on the cover of my 2010 Mets tickets (see left). The slogan "We Believe In Home Field Advantage" is boldly emblazoned on it. Last year, the Mets' record at Citi Field was 41-40, not exactly what you'd call a home field advantage.

Of course, when you consider the Mets' 29-52 road record in 2009, perhaps they did have an advantage at home. The one thing I know for sure is that the Mets were at a DISADVANTAGE when they left their friendly Flushing confines.

Last year, there were eight teams who finished with winning records away from their home ballparks. Of those eight teams, six made the postseason, including both pennant winners. This was similar to what occurred the previous year (2008), when only six teams finished above .500 on the road, four of which made the playoffs.

It's not an easy task to win on the road in any sport, but finishing with a winning road record greatly improves a team's chances to play past the 162nd game. A team is expected to win at home. That's why more than half the teams that finished with winning records at home over the past two seasons didn't play in October.

However, the majority of the teams that finished above .500 on the road continued playing when other teams were left wondering what went wrong. 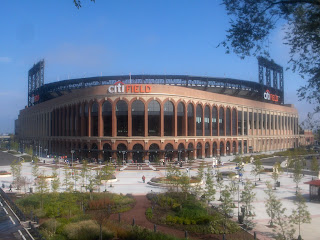 The Mets finished with a winning record at Citi Field last year. However, when a team finishes 23 games below .500 on the road, that doesn't give them much of a chance to play meaningful games in July, let alone September.

The two most outrageous home-road splits belonged to Mike Pelfrey and John Maine. Below are the stats for Pelfrey and Maine at Citi Field and on the road: 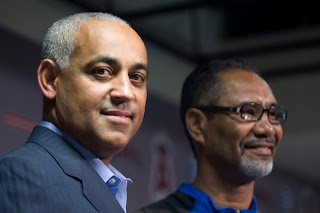 It's very easy for guys like Omar Minaya and Jerry Manuel to say that the team can compete if they remain healthy. What they really need to say is that the Mets can compete if they can perform better on the road. Using injuries as a crutch (no pun intended) can only go so far. What will they say if the team is still losing when Jose Reyes and Carlos Beltran are back in the lineup?

The Mets don't necessarily have to finish with a winning record on the road. After all, in each of the last two seasons, there have been two teams with losing road records that made the postseason cut. But no team that loses almost twice as many road games than they win can expect to be anything but a second division team.

Forget about blaming injuries, forget about blaming the ballpark. The answer to whether the Mets will succeed or fail in 2010 rests on the road. If they can take care of business there, home cookin' will taste so much sweeter this year.