The Worst Team Money Could Buy: The Sequel 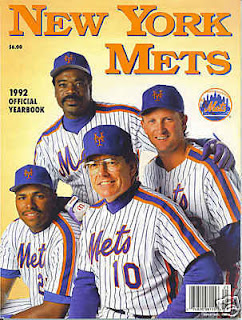 Back in 1992, the Mets added four new faces to the team in the hopes that they could recapture the glory days of the recently concluded 1980s. In new manager Jeff Torborg, first baseman Eddie Murray, outfielder Bobby Bonilla and pitcher Bret Saberhagen, the Mets thought they could knock off the two-time NL East champion Pittsburgh Pirates from their perch atop the division.

Not only did they not dethrone the Pirates, they completely fell apart, finishing the 1992 season with a 72-90 record. That was good for a fifth place finish in the NL East, 24 games behind the three-peating Bucs.

The 1992 Mets employed many high-priced players and fading veterans. They also had quite a bit of turmoil in the clubhouse. That combination of poor play and off-the-field distractions served as the impetus for the book by Bob Klapisch and John Harper called "The Worst Team Money Could Buy: The Collapse of The New York Mets".

So why is this relevant now in 2010? Because the last Mets team to begin their season with a 2-6 record was the 1992 Mets. That start has now been duplicated by the 2010 Mets.

Jeff Torborg was never the right man for the job in 1992. The 1992 Mets had to deal with injuries and players bouncing in and out of the lineup. Only Eddie Murray, Bobby Bonilla and Dick Schofield (yes, he was actually the Mets' shortstop that year, forming a double play combo with Willie Randolph!) collected over 400 at-bats in 1992. Sound familiar?

Now we're in 2010. Jerry Manuel's leadership skills are being questioned and the Mets are playing musical chairs with their lineup on a daily basis. There appears to be no continuity from game to game and the Mets have not established anything other than their position in last place.

The team appears lost and is allowing pitchers like Greg Smith and Tyler Clippard to do their best Cy Young impersonations against the high-priced bats the Mets send up to the plate day in and day out.

Although the "it's still early" mantra can still be used, the Mets are showing no sign of wanting to get out of their early season funk. There is no fire burning in the eyes of the players and they're running out of excuses. They can't use the "when we get healthy" excuse because the Phillies have Joe Blanton, J.C. Romero, Brad Lidge and now Jimmy Rollins all on the disabled list, yet they're still sitting pretty atop the division with a 7-1 record.

The Mets are only eight games into the 2010 season and they're already five games behind the first place Phillies. I don't want to give up on the season so early, but the Mets have not shown me anything that could give me even a sliver of hope that they're going to turn this sinking ship around. To borrow the team slogan, I'd like to believe the team will come back this year, but for now, it's beginning to look a lot like 1992. The 2010 Mets are probably not the worst team money could buy, but they sure aren't doing much to play like the best.