Another No-Name Keeps The Mets From A No-Hitter

Do you recognize that mug to the left? No? Then welcome to the club. The man in the Padres hat is Chris Denorfia, and he became the latest player to keep the Mets from finally recording their first no-hitter.

Last night, Chris Denorfia lined a leadoff double in the third inning against Jonathon Niese. It turned out to be the Padres' only hit (and only baserunner) of the game.

Denorfia now has full membership in the Mets' No-Hitter Breaker-Uppers Club, which is supposedly somewhere near the Caesar's Club and the Acela Club. In joining players like Jimmy Qualls, Chin-Hui Tsao, Kit Pellow and Paul Hoover, Denorfia is entitled to full Club privileges. These privileges include being booed mercilessly by Mets fans who have great long-term memories and the right to never be known for anything else other than being the one man who prevented the Mets from finally achieving that ever-elusive first no-hitter in franchise history!

Let's talk more about the latter privilege discussed above and the other Club members we mentioned. 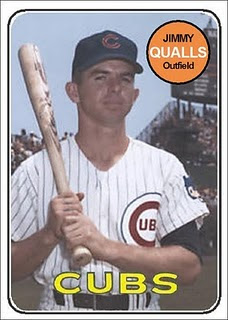 Jimmy Qualls was given Club membership when he broke up Tom Seaver's perfect game on July 9, 1969. After denying Seaver his perfecto, Qualls went on to rack up only 91 more at-bats in his short career. The ninth-inning hit against Seaver was the 12th of the 31 hits collected by Qualls over his short career that saw him start only 20 games in the major leagues. However, one of those 20 games was on July 9, 1969. 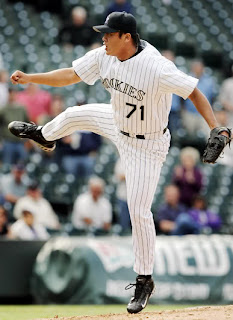 Chin-Hui Tsao had a short-lived career as a pitcher for the Rockies and the Dodgers. In his fifth major-league start on August 18, 2003, Tsao opposed Steve Trachsel for the Mets. After Trachsel retired the first 17 batters to face him, Tsao hit a double to break up the no-hitter and perfect game. The two-bagger was the first hit and only double of Tsao's career, a career that saw him start only three more games, appear in 42 others as a reliever and spawn only one more base hit, which he collected five days after joining the No-Hitter Breaker-Uppers Club. 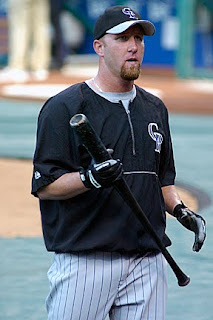 Kit Donovan Pellow (yes, his birth certificate really does list "Kit" as his first name) played briefly for the Kansas City Royals before signing with the Colorado Rockies in 2003. His moment in the sun came in his final year in the majors, when he doubled to break up Tom Glavine's no-hit bid with two outs in the eighth inning on May 23, 2004. The double was one of only 52 hits picked up by Pellow in his career. It was also the last double of his career. After joining the Club, Pellow only started seven more games in the big leagues and picked up eight additional base hits, none of which put him on another team's No-Hitter Breaker-Uppers Club.

Paul Hoover wasn't even supposed to be in the game on September 29, 2007. However, Marlins' starting catcher Miguel Olivo had been ejected from the game in the fifth inning for charging at Jose Reyes, who was standing on third base, igniting a bench-clearing incident. Three innings later, Hoover hit a 30-foot roller in front of home plate that didn't roll foul. The squibber ended John Maine's no-hit bid with two outs in the eighth inning. It was one of only three hits picked up by Hoover in 2007. Although Hoover made his major league debut in 2001 and has played in the majors as recently as three weeks ago with the Philadelphia Phillies, he has still only amassed 25 hits in the big leagues in 96 official at-bats. The No-Hitter Breaker-Uppers Club is the only thing that has rescued Hoover from baseball anonymity.

Last night, Jonathon Niese became the latest Met to be victimized by a member of the No-Hitter Breaker-Uppers Club when Chris Denorfia recorded the only hit against him in the third inning. It's only fitting that it was a player like Denorfia who got the hit. After all, looking at his career statistics, he seemed destined to become a Club member.

Denorfia broke into the major leagues in 2005 with the Cincinnati Reds and is now playing for his third major league team. Despite the fact that he has been on a major league roster for five of the past six years, he has only collected 74 hits in the big leagues, of which 16 have been doubles. Unfortunately for Jonathon Niese and the Mets, hit #74 and double #16 prevented no-hitter #1 from happening.

The No-Hitter Breaker-Uppers Club card has its advantages, which is why card-carrying members should never leave home without it. After all, unless if you're a Mets fan, no one would ever have any idea who these Club members were.