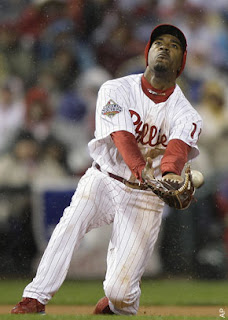 Leave it to Bud Selig to drop the ball on another ruling, this time potentially causing hardship for the Mets and an unfair advantage for the Phillies.

After defeating the Cleveland Indians yesterday in Philadelphia, the Phillies started packing for their ten-game road trip that begins tonight against the Blue Jays at Citizens Bank Park.

Yes, you read that correctly. The Phillies' road trip will begin tonight...IN PHILLY!

This weekend's series between the Phillies and Blue Jays was supposed to be played in Toronto. However, security concerns arose because of the G20 summit being held adjacent to the Rogers Centre in Toronto, necessitating the shift in the schedule.

So my question is this. Why wasn't this series moved to a neutral site, instead of moving Toronto's home games to the home ballpark of the team they're playing? Are the Blue Jays flying in their five fans to attend the games in Philly? No, they're not. The games will all be overwhelmingly attended by Phillies' Phans. 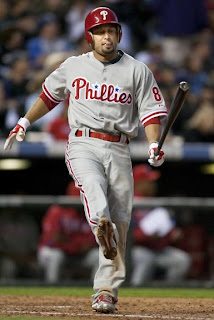 The Phillies will now be playing a total of 84 games this season in their home ballpark, while taking their show on the road for only 78 games.

Now imagine the uproar if the Phillies make the playoffs by one game. Even a caveman like the one pictured to the right can see that the Phillies will have an unfair advantage with those extra games in front of their home fans.

The Mets are one of the best home teams in baseball, currently holding a 26-11 record at Citi Field. However, they will only have 81 games at home to help improve their standings in the NL East.

Since the Mets aren't getting a break with the schedule maker, let's hope those five Blue Jays fans make enough noise at Citizens Bank Park to motivate their team to victory over the "road team".

Can that G-20 Sumbit be held somewhere else? I mean come on, you're just ruining the game of baseball!