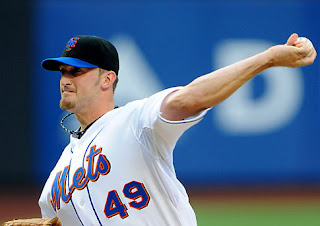 Born on the same day the Mets won their second World Series title, Jonathon Niese pitched like a champion tonight against the San Diego Padres, allowing only one man to reach base all game (a double to Chris Denorfia to lead off the third inning).

Niese became the 34th pitcher in Mets history to throw a one-hitter, joining greats such as Nolan Ryan, Tom Seaver and Dwight Gooden. On the other hand, he also joined not-so-greats Pete Schourek, Shawn Estes and Aaron F. Heilman on the Mets one-hitter list.

Whether he'll follow in the golden footsteps of Ryan, Seaver and Gooden or the muddy tracks left behind by Schourek, Estes and Heilman is yet to be determined, but one thing's for sure. Jonathon Niese has pitched brilliantly since returning from the disabled list last Saturday.

In addition to being effective in keeping men off base, he's also been very economical with his pitches. In his first start back from the DL on Saturday, he threw 90 pitches in seven innings and was only removed because of an understandable pitch count.

Tonight, Niese only needed 108 pitches to pitch his complete game gem. After eight innings, Niese had thrown 99 pitches. He could have been removed by Jerry Manuel, who had Francisco Rodriguez warming up in the bullpen. But as the crowd called for their 23-year old southpaw to come out of the dugout for the ninth inning, the bullpen door remained shut. It was then that we knew Jonathon Niese was coming out there to finish what he started. And what a finish it was. He retired Lance Zawadski, pinch hitter Nick Hundley and Jerry Hairston, Jr. on only nine pitches, capping off a nearly perfect night, when Chris Denorfia's third inning double was the only blemish in Jon Niese's performance.

The Mets have still never had a no-hitter in franchise history. But they got really close to a perfect game tonight. Jonathon Niese retired the final 21 batters to face him and at the same time might have given the Mets hope that they have a third quality starter on their staff after Mike Pelfrey and Johan Santana.

Niese has now pitched two beautiful games since coming off the disabled list last week. He also shut down the Phillies back in late April before getting hurt. With multiple successful outings this season, this homegrown talent appears to be taking the right track to a successful career with the Mets.

Nolan Ryan, Tom Seaver and Dwight Gooden all pitched one-hitters for the Mets. They were also all homegrown talents. More importantly, they all own Mets World Series rings. So far, Jonathon Niese can claim the one-hitter and homegrown talent to his name. There's one more thing to shoot for. With more outings like tonight, the Mets know that if they are to get themselves another ring, Jonathon Niese might be a key contributor towards that goal. How amazin' is that!