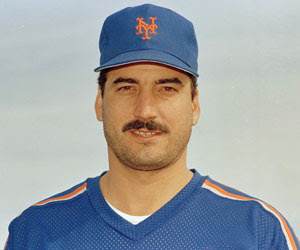 When Nelson Doubleday bought the team in 1980, one of his first courses of action was to hire a general manager who could construct a team that would make the Mets relevant in the National League again. Enter Frank Cashen.

Through inspired draft picks (Darryl Strawberry, Dwight Gooden) and shrewd trades (Lee Mazzilli for Ron Darling comes to mind), Cashen was removing the older players in lieu of younger talent in the hopes that they could harness their talents together and form the nucleus of a contending team. Some of these players had already been promoted to the Mets by 1983. However, for all the young talent the Mets were bringing up from Tidewater, they lacked leadership. Cashen knew the team needed a veteran presence for the players to look up to. They needed a gamer whose passion for perfection would spread throughout the clubhouse. The day was June 15, 1983. The player was Keith Hernandez.

Cardinals manager Whitey Herzog had made it clear that he was not pleased with Keith's attitude. He thought Hernandez was more interested in smoking cigarettes and doing crossword puzzles than focusing all his attention on the game. At the time, Hernandez was also being mentioned as one of the players involved in a cocaine scandal, which also convinced Herzog that a change was needed. Whitey had coveted Neil Allen for some time now, and when the Mets offered Rick Ownbey and Neil Allen in a packaged deal for Keith Hernandez, the deal was consummated.

Hernandez was not shy to voice his displeasure at being traded to the "Stems", as Tom Seaver called the team. But for all the negativity Whitey Herzog claimed Hernandez brought to the Cardinals, his arrival in New York infused the team with a desire to win and play well. His Gold Glove defense made the rest of the infield better, preventing many potential throwing errors and instilling confidence in the young pitching staff. No one was better at positioning himself at first base and his coverage on bunt plays was legendary.

Similar to when the Pedro Martinez signing before the 2005 season gave a struggling Mets franchise instant credibility and enticed other free agents (Carlos Beltran) to sign with the team, the trade of Keith Hernandez to the Mets on June 15, 1983 awakened the team from their six-year lull that had them in a state of hibernation since the Midnight Massacre trade of Tom Seaver. When Frank Cashen was hired as Mets GM, the Mets trotted out a new slogan to bring the fans back to Shea Stadium. They were told to come see the Mets play because "The Magic Is Back". It may have taken a few years, but 27 years ago today, the Magic arrived at Shea Stadium in the form of our beloved soon-to-be captain, Keith Hernandez.

On a related note, June 15, 1983 is special to me for another reason, for it was on that date that I attended my first Mets game at Shea Stadium. I went to that game with the rest of my Little League team. I remember how happy the sparse crowd was when the news was flashed on Diamondvision that the Mets had acquired Keith Hernandez from the St. Louis Cardinals. I also remember how confused I was that the biggest cheer of the night was reserved for the "big TV screen in left field" rather than the events taking place on the field.

Craig Swan started that game and was hit hard by the Cubs. By the time I got back from my second bathroom break (my Little League teammates were not amused that I kept stepping on their feet every time I tried to squeeze by them in our upper deck seats), Swan was out of the game and the Mets were down 4-0. The bullpen pitched very well after Swan's early exodus and the Mets rallied to tie the game, necessitating extra innings and causing some of the parents and chaperones to wonder if they should take the kids home. The Mets lost that game to the Chicago Cubs in 10 innings by the score of 7-4. If I remember correctly, Bill Buckner drove in the go-ahead run in the 10th. Who knew that he would play such an important role in Mets history just a few years later when the little roller went behind the bag?

It didn't matter that the Mets had lost that game. It was one of 94 games they lost that season anyway. That day was important to me for more than just a game. That day began my love affair with Shea Stadium and my subsequent appreciation of Keith Hernandez. I should have known the Mets had acquired someone special when I listened to the sweet voice of Bob Murphy after the game during the radio post-game show when he said "the Mets lost the game tonight, but they have gained a superstar." Twenty-seven years ago today, the magic entered my life. It has never left.

Awesome post. I also have great memories of little league and summer camp trips to Shea in the early 1970s.