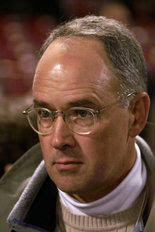 Welcome to the latest edition of Broken News, where other people break the news and we break it some more to the point where forensics experts can't even identify it. In today's edition, we discuss the hiring of Sandy Alderson as the new Mets general manager.

According to numerous tweets, including one by Jon Heyman and one by Joel Sherman, the Mets have notified both Sandy Alderson and Josh Byrnes that a decision has been made and that Alderson is their choice to be their next GM.

Since Major League Baseball generally frowns upon major announcements on days when World Series games are being played, the Mets will more than likely not make this signing official until Friday. The Giants and Rangers have an off day between Games 2 and 3 as the Fall Classic moves to Texas over the weekend.

Alderson brings a decade and a half of GM experience to the Mets, as he was in charge of the Oakland Athletics from 1983-1997. Under his reign, the A's won four division titles and three American League pennants. Oakland won the World Series in 1989, when they swept the San Francisco Giants in the series known more for the devastating earthquake that struck the Bay Area before Game 3.

It was Alderson who introduced sabermetrics into the world of general managing, a system that he passed along to his successor, Billy Beane. By using sabermetrics, both Alderson and Beane were able to put together competitive teams while spending as little money as possible by focusing on statistics that help teams win ballgames, but don't necessarily lead to exorbitant contracts. (One such stat is on-base percentage, as detailed in Michael Lewis' book, "Moneyball: The Art of Winning an Unfair Game".) It was this cost-effective system that helped Beane become one of the best and most coveted general managers in baseball.

So now Alderson will be on hand to help turn the Mets around from a fourth-place team to a contender. His plate will definitely be full at the start.

From Hisanori Takahashi's soon-to-expire contract to the search for a new manager to the acquisition of a starting pitcher (especially when you consider the uncertain status of incumbent ace Johan Santana), Alderson will have to make many key decisions early on in his tenure as general manager. It will be these decisions that will serve as the seeds for what Mets fans hope are a return to respectability and contention.

A change is in the air, Mets fans. Let's hope Sandy Alderson is the man who will bring it to us.