Dickeypedia Word of The Week: Narrative

Welcome to the first weekly (or so we hope) installment of "Dickeypedia Word of the Week", where we take a word from an R.A. Dickey quote, define it for you, then go to a former or current Met and ask him to use it in a sentence.

The first word taken from our Dickeypedia is the word "narrative", which was uttered by the scholarly R.A. during an interview with the New York Times' David Waldstein. In discussing the memoir that he is writing, Dickey said: 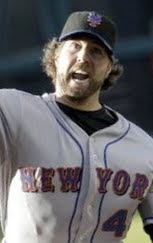 "It’s inevitable in any good narrative that there’s conflict. That’s the way life is, and to be honest about that conflict, you’re going to have a response.”


A quick check of our dictionary (I'll spare you by not calling it a Dickey-tionary) shows the following definitions for the word "narrative" as a noun:

true or 2. f2ictitious.R.A. Dickey already used the word in a sentence during his interview. We decided to ask former Met legend (in his own mind) Gregg Jefferies to use "narrative" in a sentence and this was the best he could offer: 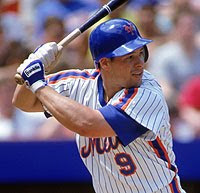 "Although I felt that I was the true MVP of the 1988 Mets, I was surprised to learn that some of my teammates thought I was cocky and a crybaby. I haven't been able to determine who these teammates were, but I've narrative down to Keith Hernandez and Roger McDowell."

That's right, Gregg. You not only found a way to become a cancer in the Mets clubhouse, but you were also able to turn the word "narrative" into a verb. Perhaps the extra "G" in your first name stands for "genius", although you'd probably correct me by saying that "genius" starts with a "j".

That's all for this week's installment. Be sure to come back next week when we cogitate about Dickey's next profound statement, and perhaps ask one of your least favorite Mets to make bigger fools of themselves than they did on the field.

I used to love Gregg "Two Gs" Jefferies. Although now, I am embarrassed to admit so. I knew he wasn't the sharpest tool in the shed, but I had no idea he was THIS dull!