Think fast! Who hit 62 triples, stole 281 bases, hit one little roller up along first and has 55 candles on his birthday cake today? It's none other than Mets Hall of Famer and current first base coach Mookie Wilson, that's who! 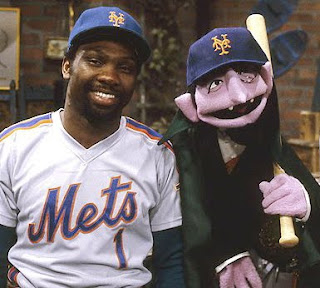 One of the above will be blowing out 55 candles today; the other will be counting them.
When Mets fans think of No. 41 on the Mets, they always think of Tom Seaver. The same thing goes for No. 14 (Gil Hodges), No. 17 (Keith Hernandez), No. 31 (Mike Piazza) and No. 37 (Casey Stengel). For me, No. 1 will always be synonymous with William Hayward Wilson.

Most fans will tell you that Mookie Wilson was one of the most electric and charismatic players to call Shea Stadium home. Those fans will also say that Mookie had the most crucial at-bat in franchise history, when he faced Bob Stanley in the tenth inning of Game 6 of the 1986 World Series. But even those fans might not know everything about Mookie Wilson.

To celebrate the 55th birthday of the man who brought out the inner cow in Mets fans (Moooooo.....), here are a few things about Mookie Wilson you may not have known. 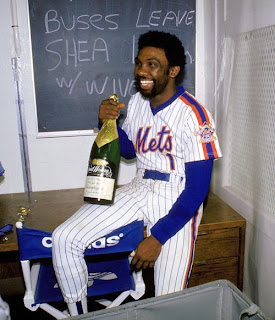 What's bubblier? The champagne in Mookie's hand or his effervescent personality?
Mookie Wilson made his major league debut for the New York Mets on September 2, 1980 at Dodger Stadium. Another key player from the 1986 World Champions also made his major league debut on that day, as Wally Backman played second base and batted eighth in the Mets' lineup (Mookie was the leadoff hitter). Wally's debut (2-for-4, 2 RBI) was slightly better than Mookie's (0-for-4, RBI groundout), but both went on to become favorites among the Shea faithful.

Despite being called up in 1980, Mookie Wilson qualified for the 1981 Rookie of the Year Award. Wilson finished seventh in the voting, receiving 1½ votes. Who did Mookie split a vote with? It was none other than teammate Hubie Brooks, who received 8½ votes to finish third.

No one would say that Mookie Wilson was a great hitter, but for two seasons, he was among the best in the league. In 1982, Mookie finished 10th in the National League with 178 hits and followed that up with 176 hits in 1983, good for 8th in the NL.

Mookie Wilson was known for his lightning fast speed, setting the franchise record for triples and stolen bases in a career (both marks have since been surpassed by Jose Reyes). Who held those records before Mookie claimed them for his own? That would be Bud Harrelson (45 triples) and Lee Mazzilli (139 stolen bases). 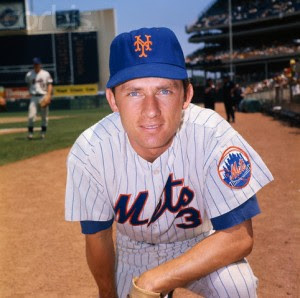 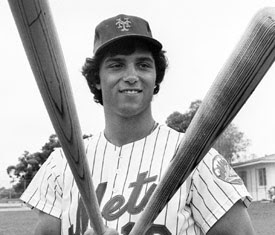 Bud Harrelson: The "3" in his uniform number stood for three-base hits.
Lee Mazzilli: Stole his way around the bases and into teen-aged girls' hearts.
When Mookie Wilson hit 10 triples and 10 home runs in 1984, he became the first Met to reach double digits in both categories. The only other player in Mets history to accomplish that feat is Jose Reyes, who has done it four times (2006, 2007, 2008, 2010).

There is one stolen base record that Mookie Wilson still hasn't lost to Jose Reyes. That would be caught stealing. The über-aggressive Mookie was thrown out 90 times in 371 attempts. Reyes will probably surpass him this season, as he has been gunned out 85 times.

It should come as no surprise that Mookie Wilson was able to get out of the way of Bob Stanley's wild pitch in Game 6 of the 1986 World Series. After all, in ten years as a Met, Mookie was only hit by 16 pitches. By comparison, John Olerud only played three seasons in New York, but he was hit a total of 28 times.

Finally, what do Mookie Wilson and Mark McGwire have in common? Not much. But they do have one shared piece of baseball history. In 1989, Mark McGwire finished the year with 33 HR and 95 RBI, helping the Oakland A's win the World Series. Mookie Wilson was traded from the Mets to the Blue Jays on July 31, picking up two home runs and 17 RBI in 238 at-bats for Toronto. Somehow, both Mookie Wilson and Mark McGwire received exactly one American League MVP vote apiece, finishing in a tie for 25th place in the voting. Something tells me that one of the voters was also a member of the Toronto chapter of the Jeff Musselman Hate Club, and was thrilled that Mookie's arrival led to Musselman's departure. 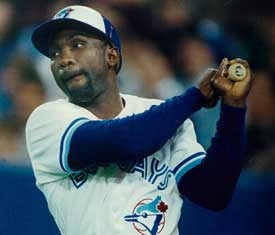 Let's not talk about this picture, shall we?
Mets fans have not seen the last of Mookie Wilson, as the fan favorite will be the team's first base coach in 2011. With stolen base threats like Angel Pagan, Jose Reyes, David Wright and Carlos Beltran, the Mets have a number of candidates who will be heeding Mookie's "GO" command from first base. It will be interesting to see how the players respond to having an experienced basestealer coaching them at first base.

Mookie Wilson once said "thou shalt not pass at thy offering" to describe his hitting philosophy. Therefore, as we celebrate his 55th birthday today, we shall not let the day pass without offering Mookie Wilson our best wishes for a happy birthday and a successful 2011 season as the Mets' first base coach. It may be true that the baseball season is a marathon and not a sprint, but try telling that to one of the fastest and most beloved Mets of all time.