A Healthy Reyes Brings Hope To The Mets

In an article in today's New York Post, Mike Puma writes about Jose Reyes and his desire to return to his pre-2009 self. Reyes, who made a public appearance in Harlem yesterday, declared himself healthy and ready to report a week early to Spring Training.
With words that are sure to please even the most pessimistic Mets fans, Reyes was quoted as saying: 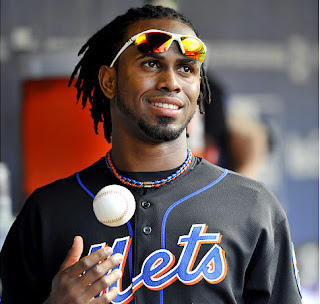 "Last year there were some questions about my legs. I spent all last year and the winter helping my legs. This year I don't have to worry about my legs or anything like that. The last two years have been kind of rough on me, but there is no doubt in my mind I'm going to be the same Jose Reyes that played in 2008. I've been working so hard this offseason, so there is no concern at all."

In addition to his declaration, Reyes announced that he will arrive at Port St. Lucie at 205 pounds, which is seven pounds heavier than his 2010 playing weight. Whether the extra weight will help him around the bases is yet to be seen (Red Sox speedster Carl Crawford is an inch taller than Reyes, but weighs 215), but a healthy Reyes is crucial to the Mets' success in 2011.

In 2010, Reyes played in 133 games, battling injuries throughout the year. Reyes' 30 steals represented his lowest total over a season in which he played at least 100 games, after averaging 65 stolen bases per year from 2005 to 2008.

It always comes down to health with the New York Mets. Will Jason Bay come back from his concussion to post the power numbers expected of him? Will Carlos Beltran be able to play at more than 85% for a full season? Will Johan Santana's changeup be effective when he finally returns to the mound? As with those players, the same can be said for Jose Reyes.

Reyes is the catalyst from which all else follows. As Reyes goes, so go the Mets. SNY feeds us the numbers ad nauseum. Whether it's the Mets' record in games where Jose Reyes scores at least one run (the team was 42-22 in 2010 when Reyes crossed the plate at least once, in case you didn't know) or their record without Reyes in the lineup (they're 65-90 without Reyes since the beginning of 2009), it's clear that the Mets need their shortstop and leadoff hitter to be Jose Reyes B.C. (Before Citi).

With all the recent talk about lawsuits and the search for ownership partners, perhaps Jose Reyes uttered the four words that could put an end, albeit a temporary one, to all the turmoil surrounding the team, when he said: 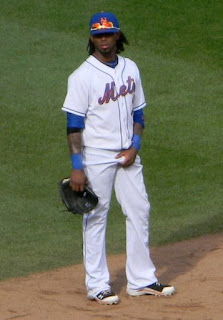 A one-two punch of Jose Reyes and Angel Pagan at the top of the order could prove to be quite a headache for opposing pitchers. In 2010, they became only the ninth pair of teammates to steal 30 or more bases in the same season, as Reyes swiped 30 bases and Pagan stole 37.

Look out, Mets fans. It appears as if Jose Reyes is about to grab the 2011 season by the balls and the rest of the National League should take notice. Opening Day can't get here soon enough.