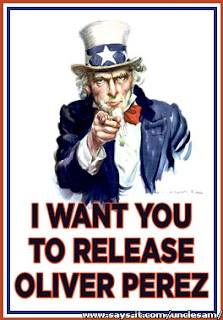 All throughout the winter, Oliver Perez has tried to regain what used to pass for his fastball. He went to the Mexican League and became a Tomato Picker (No, seriously. If you don't believe me, click here.) That failed.

He showed up early at Port St. Lucie for Spring Training and talked to Terry Collins and Sandy Alderson about his desire to start ballgames. Blah, blah, blah.

For approximately 15 minutes, he fooled Sandy Alderson into thinking that he had recovered the ability to throw strike one before ball four. Nice try, Ollie.

Now, he's been given until March 10 to prove to pitching coach Dan Warthen and the Mets why he should be a part of this team. If he fails to do so, he will either be demoted to the bullpen or given his outright release.

You'd think El Perez-idente would take advantage of the umpteenth opportunity afforded to him to prove that he can still earn at least one dollar of his $36 million contract. Right?

So today Ollie hops, skips and jumps his way to the mound in the Mets' exhibition game against the Braves. He's given two innings to try to save his career and our sanity. What does he do with the chance? I'll spell it out for you in six short sentences that even Ollie could understand:


Never mind the fact that he also struck out three batters. Those were sympathy Ks by the Braves. They know that if they make him look good by racking up a few strikeouts, they make the decision to cut Oliver Perez far more difficult for Mets management.

Mets fans have put up with this poor excuse for a major league pitcher ever since he put his "x" on the three-year, $36 million contract in 2009. The day he left his John Hancock on that contract was the last time Oliver Perez was able to put something where he was told.

Do us all a favor, Mr. Alderson. That March 10 deadline for Oliver Perez? Ignore it. Make it February 27. Cut him now. If you don't, you risk having Terry Collins actually having to bring him into a game during the regular season when Ollie won't be facing players who will give him sympathy strikeouts. 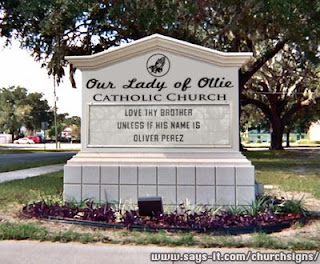 Jesus saves. Too bad Oliver Perez's career has already gone to Hell.
We've had enough. In your short time as GM, you should be fed up as well. Increase your popularity rating with the Mets 46-fold by ridding the team of No. 46. In fact, just retire the number while you're at it. No one should be forced to wear the most unluckiest of numbers after Ollie's negative energy has permeated it.

Simply stated, "Ollie, Ollie, Axe Him Please!" At least if the season goes badly, that would give us one highlight to celebrate.

i think, at whatever point in time, the decision is made about exactly where Ollie ends up, it will be a big statement from the new administration as they go and flex that muscle that Omar and Jerry could never flex.

Whichever answer it is, it'll be a huge statement, especially if it's one of the first two options.

Great post, Ed! I could not agree more!
Phil Groh

I would have much more confidence in the direction of the team if they were to cut Ollie despite his $12 million salary. It would send out a message to the other players that they must perform to the best of their abilities or else!