Apparently, there's a new comedian that's the latest ('roid) rage, as Adam Rubin reports on ESPNNewYork that Roger Clemens has been able to find some humor in his infamous bat throwing incident during Game 2 of the 2000 World Series. 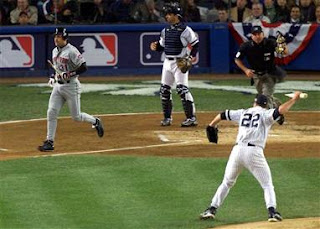 Scenes like this always make for good comedy material. Isn't that right, Roger?
For those with no long-term memories, the incident occurred when Mets' catcher Mike Piazza hit a foul ball on a Roger Clemens offering, breaking his bat in the process. When the sharp end of the bat landed near Clemens' feet, the hurler took the projectile and flung it in the direction of the Mets' slugger, clearing both benches. At the time, Clemens claimed that he thought it was the ball Piazza had hit. Of course, this made perfect sense since both teams were playing with 19th century rules, where a fielder could register an out by throwing the ball directly at the batter/runner instead of tossing it to first base. Oh, they weren't? My bad. Then I have no explanation for what Clemens did.

Anyhoo, the current Hall of Shamer was at a charity event last night in Uncasville, Connecticut and reflected on the event from a decade ago. Apparently, he believed that would be the perfect time to joke about the Piazza incident by saying: 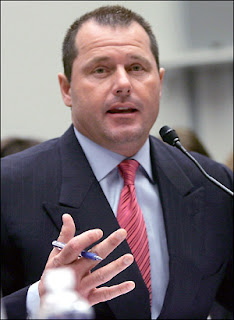 "I just remember my form being really good when I threw the bat. My form was impeccable. I fielded it perfectly. My arm angle when I whistled it on-deck was a little low."


So now Roger Clemens is a comedian, because it's funny to joke about throwing a sharp weapon at an unsuspecting player who's standing less than 60 feet away from you. This is the same player who Clemens gave a concussion to when he hit him in the head with a 90+ MPH fastball during that same season.

I wonder how Piazza feels about Clemens' comedy act. One thing is for sure. While Piazza is preparing his Hall of Fame speech in 2013, Clemens will be preparing his latest lie to a judge. I'm sure Piazza will find plenty of comedy in that routine.